Formula 2 heads to Bahrain for the final two rounds of the season.

The Bahrain International Circuit is a medium speed, medium downforce track with some fast corners, some mid-speed corners and some slow ones. Sand blowing onto the track can cause low grip, which is something both Carlin drivers will have to contend with as they aim to finish the season on a high.

Yuki Tsunoda will want to claim as many points as he can so he can be in with a chance of winning the drivers’ championship while the others in the fight lose points.

The Japanese driver will want to draw on his abilities and support from the team as he looks to make up the 44 point gap to the leader on the first of two weekends held at the same circuit.

Yuki Tsunoda said: “It will be four tough races in Bahrain think. Probably the most incredible races in my life so far. We know that we can do it, we just have to put it all together, me and the team. Hopefully, I can make really good races.

“The rookie test at the beginning of the year went really well. We’ve already got positive data from there, and that gives us the confidence that we should have pretty good pace.

“Of course, I always want to do well; I am going to carry on like I have been all year, focus on things lap by lap, session by session and not think too much about the championship. That is what I have been doing from the start of the year… it has been getting more difficult to do that, but that is what I will try to do.

“Braking is very important at this track, and that is a strong point for me, and I had a good feeling from the beginning of the year. I will try to use that experience and do the best to crack on.”

Meanwhile, teammate and fellow Red Bull Junior Jehan Daruvala will hope to continue the pace he showed in Sochi and run near the front of the field.

A few good results for the Indian driver could see him jump up the table, but he will need to continue his form from Russia first.

Daruvala said: “We’ve had a couple of months off so; obviously I’m really looking forward to getting back to driving. I think Sochi was a big step forward for me personally and things went quite well there.

“Also, preseason testing went well for us in Bahrain as a team, so I think we should be pretty strong through the next two weekends.

“Honestly, I’m just looking forward to getting back in the car and pushing the limits. It is good to have two different layouts, and we’ll see who can adapt better.

“I have never raced here, but I’ve been here quite a few times and done a good number of laps testing. I’ve always gone quite well; I pretty much know what to do to be fast around here. So, if I can execute my plans, I am quite sure I can be quite competitive and fight at the front.”

The first of the two weekends in Bahrain will be run on the traditional Bahrain circuit that the drivers know from preseason testing and will get underway tomorrow when the cars take to the track for the practice session. 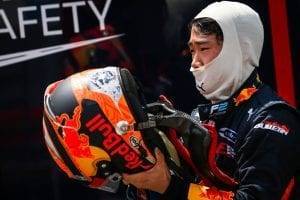