Yuki Tsunoda and Jehan Daruvala have their sights set on success for Carlin as they get ready for this round of the Formula 2 Championship.

F2 will leave the European Union for the first time during the season as it heads to a close with three rounds left. The first of the three final rounds will take place in Russia.

While the drivers raced in Russia in Formula 3 last year, it will be their first taste of the track in Formula 2 machinery.

Last year, Yuki Tsunoda came away from Russia with no points in either race including a DNF in the Sprint Race.

The Japanese driver currently sits sixth in the championship, only 38 points off the lead.

Tsunoda doesn’t want to change his approach to the weekend ahead of the round in Russia. He wants to get as many points as possible to close the gap between him and the Championship lead.

Tsunoda said: “Three race weeks left so each race week is going to be more important than the one before. I will have the same plan, as usual, just to push to the end, usual driving style.

“I’m sixth in the championship at the moment, so one way to look at it is the positive way, I don’t have to think about being careful to save points, just push to the maximum for the result and the points will be something extra.

“I drove here last year in F3; I couldn’t drive well compared with the others. I felt I was not fast enough. This year is different, I felt good in the simulator, and with the experience from last year, I think I am much better prepared. I like the track; it is very technical, the opposite of Mugello. Lots of mid-speed and slow corners so it will be interesting.

“Of course, the Supersoft is a very grippy tyre; it’s fun to drive, so I am looking forward to that. I can expect that there will be a lot of degradation, the other tyre, the Medium is also quite soft compared to the tyre we ran at Mugello and other places. I think that a high deg track is good for us because Carlin understand it well. So, I think it will be a strong race week for the team, and I just have to pull it together.”

Daruvala has his mindset on moving forward this weekend and aims to make the most at a track where he feels confident.

Last year The Indian driver managed to finish fifth in the Formula 3 Feature Race bit finished outside the points in the second race of the weekend.

Daruvala currently sits 15th in the standings with a chance of climbing towards the top 10.

Daruvala said: “Honestly, I am really looking forward to it. Last year I went pretty well there, and at our last event in Mugello, I think that though the results didn’t show it, I think we took steps forward. It was a positive weekend for me, a good qualifying, two good race starts.

“I also like the track in Russia, so I am very positive. After this race, we have two months off, so it is important to maximise it, get a good result so that we can go into the break with a nice and positive mindset.

“We are back with the Supersoft tyres that we had in Austria. Last time we had those tyres, Yuki qualified on pole, and I was also in the fight for pole so I am pretty confident that the car should be good.

“We also have the Medium tyres for the race, so I expect it to be quite a high degradation race. It is going to be important, the stuff we learnt in Mugello, to carry forward to Russia.”

Carlin is currently fifth in the team standings with three rounds to go to get them up the table.

Carlin will want this weekend to be better than Mugello to help them with their chances of getting themselves, and their drivers, further up the standings by the end of the season.

Both drivers have got their minds set on the weekend, as Tsunoda and Daruvala aim for a good weekend ahead of a two-month gap. 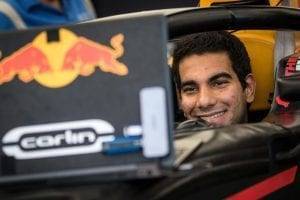