Carlin Have Great End to 2020 Season

Carlin Have Great End to 2020 Season

It was a brilliant end to the Formula 2 season for Carlin and their drivers Yuki Tsunoda and Jehan Daruvala.

Tsunoda drove to a hard-fought-for victory from pole in the Sakhir Feature Race, then battled through from eighth to second in the shorter Sprint Race finishing just behind teammate Daruvala to complete the weekend of Carlin domination.

The almost perfect weekend for the Japanese driver promoted Tsunoda to third in the championship, just a single point of the second-place driver.

Tsunoda said: “It was an incredible weekend. I got 43 points. I have to think the Carlin guys for giving me a fantastic car, just as they did last weekend. We stuck to our usual plan and didn’t try to do anything special, we just needed to adapt the car a little bit for the changes in the track, but we had good pace from the beginning.

“I got P1 in free practice and again in qualifying. I expected that track management would be very difficult, and luckily my engineer Matt [Ogle] did a great job, especially sending me out for the first stint, and we could take pole.

“Race 1, the start was ok, but the track position into turn 1 was really bad, and two cars got past. Then I saw the two cars in front were pushing a lot, and I thought that they won’t have this pace to end. So, I just tried to manage the tyres as much as possible.

“Then, for the last ten laps, I pushed, and that worked really well, so I got P1. The pace was good, the car was amazing, just like last weekend when we went from P22 to P6 in Race 1. I had great confidence from the beginning, I just had to do my job, and I was able to focus on my driving – A big thanks to Carlin.

Then Race 2 today, again, the start was good, but track position was poor, and I lost three positions. So, from there, I just tried to gain positions as fast as possible without forgetting the tyre management. I managed to do that and finally took P2 on the last lap.

“I think that this week has been the best week of my career and thanks to Red Bull, Carlin and Honda for this year.”

Daruvala’s first F2 victory was a fitting end to the year and an excellent recovery after frustrations earlier in the season.

Daruvala said: “We had good pace from the start of the weekend. We got familiar with the track straight away. Yuki and I were on top in free practice, and I was top three in quali, so I was happy with that.

“In the race yesterday, I tried to pit early to undercut the cars in front, but it didn’t really work out how we planned. There was no real undercut so I just lost out there and had worse tyres for the end of the race and they faded away.

“Obviously, we knew the car was good because Yuki won the race. So, I learnt what I could overnight from the data then basically stuck to my plan today. To not go out ‘all guns blazing’ but rather make a good start and settle into the race knowing that we have a good car that should come strong at the end.

“Dan [Ticktum] didn’t make it easy, that was to be expected, fighting for the win, it was great fun. A few months ago, I was not in a good place, but things have been getting better, and everything is on the right curve. To end the season with a victory is a very nice feeling. A bug thanks to the team. A one-two, what a way to finish.”

Carlin will remain in Bahrain for the post-season test happening between the 8th and the 10th of December where they will test two drivers ready for the 2021 season. 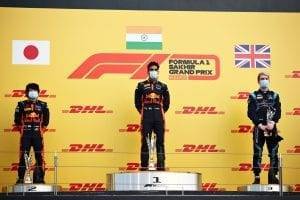