Carlin had an impressive Feature Race as both their drivers got themselves into the points.

Jehan Daruvala started eighth on the grid and fought through the field to take third place. But the Sunday race wasn’t as good. The Indian driver had settled into a good position in the race when he was taken out with a hit from behind.

Daruvala said: “We were quick right from the start of the weekend, me and Yuki both. Then qualifying was eighth, but there was so much potential. Honestly, Callum’s lap was good, but we had the potential to be on the front row but with yellow flags, traffic, all that we were eighth. I knew that I was out of position and could be strong in the race.

That’s what happened, a good start in the first race, the starts have been coming along quite well. I made up positions on the first lap, but the prime runners had a better stint than us on the options, so that was a bit hard.

But as soon as we put the prime tyres on and had the track to ourselves, we could just stick to our plan and build into the race. Honestly, the tyres hung on well; everyone could see that it was a good battle with Mick [Schumacher].

“I knew that if I held him back and made him work extra hard, then his option tyres would fade away. Obviously, I made it as hard as I could for him, and in the end, it worked out. I tried to keep up a good pace so that he had to push to stay with me and his tyres would fade but to be fair to him, he did do quite well. So, me trying to eke out that gap made me also suffer in those last four or five laps.

“Once I had defended for two or three corners, his rears started to overheat, and I had a bit of a buffer for the last lap or so. I was really happy to get my first podium.

“We made a plan to just look after the tyres today. The plan was just to have a good start, which I did, and take things from there. It was another good start, started sixth and was up to fourth by Turn 1 already. We stuck to our plan. Which was basically not to push in the first five or six laps at all, stay out of the DRS of the car in front, stay in clean air and allow the tyres to come in slowly.

“My engineer came on the radio saying that it looked like Mazepin was going for a pit stop because he was pushing very hard. So, I didn’t bother to fight him; I was just focused on my own race. I had another good Safety Car restart, but then I got hit. I couldn’t do anything.

“It’s a shame because both the cars were fantastic this weekend and honestly we both could have been fighting for, maybe not the top step, but good places on the podium—a big shame.

Yuki Tsunoda charged through the field from 22nd and last to sixth. But also suffered after an early collision in the race. The Japanese driver took second off the line only to be hit from behind at the very first corner.

Tsunoda said: “Qualifying was really my fault. I’d left plenty of gap to the car in front but still caught the car ahead in Sector 2, and at Turn 12 lost downforce and spun. I kept the engine running but for some reason when I changed down to re-join it stopped. So that was it, I was stuck and could not re-join.

“[The team] said that of course, we support you, the race will be hard work, it will be a tough day, but we know you can do it.

“I had to start from the back; I know that tyre management would be very important, and I worked hard on that. In the second stint, I had a lot more pace, and I just went as hard as I could to gain positions, and we also got the fastest lap, so that was very important for my championship points.

“Also, I had good pace, third on the reverse grid. I made a good start and was next to P1, om the outside going down to Turn 1. I backed off and switched to the inside for the exit, but I knew that P3 would probably be coming inside, perhaps going too deep so I left room.

“P3 came in much too deep and smashed into my rear right even with the gap I had left him. It damaged the tyre valve, and I lost pressure. So, I had to stop at the end of lap 1 for a new tyre.

“Then there was a safety car, so we took a gamble on coming in again for a full set, expecting it to last for two laps or more. But it didn’t so we were left a long way behind. We were faster than the others and catching, but it was not possible to get into the points.”

It was a frustrating end to a weekend that started off great, but Carlin will be hoping that the final Formula 2 round of the season will be better when Formula 2 return to the circuit on the new outer track layout next weekend. 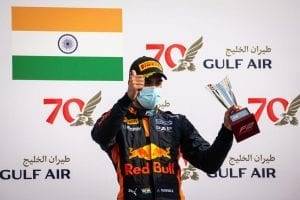