Carlin had a mixed weekend with both their drivers in Monza.

Yuki Tsunoda qualified second, but a poor start saw him drop down the order. He climbed up the order to finish fourth. He started the Sprint Race from fifth, but it didn’t end as well, and he was forced to retire due to engine problems.

Tsunoda said: “The start of race one was okay, but track position was not good enough and I lost 2 positions. But I then recovered a position to P3. The pace was very good on the Option tyre, so after I got to P3, I was catching P2.

“I caught P2 before Ascari, but I pushed too much on entry, and I got massive oversteer, and I had to slow, and that allowed the guy behind me to catch, and after that, it was a bit messy in Turn 1. Luckily, I didn’t get any damage.

“P1 and P2 got far away. That was my mistake, but we still had quite good pace, and I was concentrating.

“After we changed for the Prime, the pace was okay but not enough compared to the Hitech guy and the Prema. At the end, the pace was quite good, maybe I was saving too much in the beginning, there was a lot of tyre left at the end, but I think still not enough pace for the podium.

“The Race 2 start was good; on lap one, I gained a position and was P4. On Lap 2 I lost power after Ascari, it went into Safety Mode, I tried switching off the car to reset, but it didn’t work. Then it did reset, and it worked, but there was still an issue, in the pits, the Mecachrome guy managed to fix the problem, so we went out just to do a stint to test and then was pushing to the end, I got the fastest lap, and the car was working well, good enough to compete in the top 3 today.

“This can happen, problems happen, so I just have to reset my mind and refocus for Mugello.”

Jehan Daruvala started the Feature Race from eighth place and finished in 10th, which is where he began the Sprint Race. In the reverse grid race, he made his way into the points and up to sixth place.

Jehan Daruvala said: “I felt like I did a good job with my driving, Trevor (Carlin) and the engineers were with me on that side, so that was good. Then in race one, it was clearly an issue because I was the only car that couldn’t overtake even with DRS. So that was really frustrating.

“So luckily we got an engine change overnight, and from my side, though we haven’t seen the data yet, it felt a lot more positive. I felt again that I could fight, if I drove well and had good exits, then I could at least have a chance on the guys in front.

“”I was closing on the car ahead when we had the late VSC and then somehow lost a lot of time, we have to look at why that happened.

“Still I think it was a step forward, we found some performance on the straights, and I think that will also show next weekend as Mugello is another quick track. It’s a new track for everyone and a good challenge.”

Carlin will hope that the next round in Mugello will involve more points and a podium when Formula 2 heads to the circuit for the first time in less than a week. 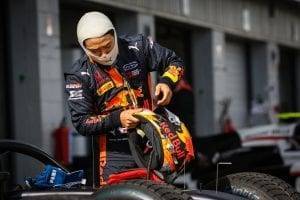