Carlin rookie Logan Sargeant endured a difficult 10th round of the FIA Formula 2 Championship, retiring from the Sprint Race and sliding from fifth on the grid to 10th in the Feature Race. Leaving the Hungaroring, Sargeant had fallen to 61 points behind championship leader Felipe Drugovich with four rounds to go.

Sargeant’s Sprint Race ended in pit lane on the opening lap after he sustained terminal front-end damage when Drugovich lunged to his inside at the first corner and knocked him into Dennis Hauger.

InsideF2 caught up with Carlin Deputy Team Principal Stephanie Carlin later that evening in the paddock. She lamented Sargeant’s second consecutive retirement after he also lost a possible podium in the Feature Race at Paul Ricard to a clutch failure during his mandatory pit stop.

“Obviously, it was really disappointing for Logan after the bad luck that he had last weekend in the Feature Race, when he was on track for a really good result and there was a situation out of our control, and then again to be the kind of innocent victim today.

“We saw that a driver was out of control as they arrived in the corner and kind of used Logan to get around the corner, so it was a real shame for him that he was out instantly, basically,” she said.

“That’s a loss of some potentially really good points, so that was pretty heartbreaking to see after Paul Ricard.”

Despite the difficulties in Budapest, Carlin praised the progress Sargeant had made in a ‘hugely competitive’ F2 season. A spectacular run of form in June and early July helped elevate the Williams Driver Academy prospect to third in the standings, with 119 points and two Feature Race wins at Silverstone and Spielberg to his name, but Sargeant wasn’t always so confident in his own performances.

“Logan was really, really hard on himself at the start of the season. He expected far more from himself. I think he thought that because he’d kind of come up from F3 and was already familiar with the Pirelli tyres, he should hit the ground running.

“Although there are so many similarities, F2 is quite a different beast. It’s very hard, and the depth of talent in the field is huge,” she said. “He needed to cut himself a bit of slack, really. We were really pleased with how he was doing from the start. And this form that we’re seeing now, mid- to late-season, is exactly what we’d expect from him.”

The Budapest round was Sargeant’s worst since Round 2 in Jeddah, where he was involved in a crash in the Sprint Race and failed to score in the Feature. Those tough days might dent the confidence of a driver as self-critical as Sargeant is, but Carlin said that the championship’s gut punches also offer a valuable opportunity for growth.

“I think any bad experience a driver has would affect them when they want it as much or are as passionate about it as Logan is, as a lot of the drivers are. But the key to being a strong driver is to roll with the bad days as much as the good days and allow those to teach you something as well,” she said.

“Although it’s hard right now, I have no doubt that Logan will come out of it as a better and stronger driver. It’s part of the process. There’s normally more bad days than there are good days in motorsport – in any sport, really – but we’re hoping that we’re giving him enough support internally so that it doesn’t affect him too much going forward.” 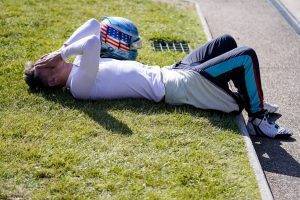