Carlin hoped for more from Mugello

Carlin hoped for more from Mugello

Their drivers failed to finish on the podium despite the good results in the race.

Jehan Daruvala was on the back foot in practice due to issues with his brakes. However, he bought it back in qualifying and managed to put himself into sixth.

A radio problem in the Feature Race left Daruvala not sure when to pit and he when he did pit he found teammate Yuki Tsunoda in as well. The Indian was forced to wait for Tsunoda to leave the box before he could have his tyres changed and he dropped down the field.

Jehan Daruvala said: “Race 1 I had a good start but then got a bit boxed in at Turn 1 round the outside and lost a couple of positions there. Then, to be honest, I did not have much speed at all on the Option tyre. I fell back to, like, 12th.

“Then the Prime stint was really good; I was the fastest car on track for all 11 laps before the VSC. We decided to do another stop, but then there was another Safety Car so not too many racing laps so that decision probably did not work out, but we still got a point. Still, it was disappointing start 6th and only getting one point.

“(Sprint Race was) again a good start, so that was a good improvement this weekend, two good starts. I worked my way up to P5 at one point. Then I kind of lost grip after the VSC, sort of burnt my tyres up coming through the field and in the last 3 or 4 laps completely lost my tyres.

“In general, it was a good weekend. The new power unit obviously helps; it is more competitive and shows something about the past races before we got that. I would like to keep making those steps forward and get to the podium.”

Yuki Tsunoda had a good practice session despite it being his first time in Mugello. He managed to adapt to the track quicker than even he would have expected.

Qualifying saw the Japanese driver finish in p11. Tsunoda had to abort his first push lap because of yellow flags. He made a mistake on his second set so couldn’t improve and had to start on the sixth row.

Yuki Tsunoda said: “Race 1, the start was good and I gained a few positions on lap 1. After that, the pace was really good, I overtook quite a lot of people and I think was going well. Then when I was P4, we got a Virtual Safety Car. That I understood, there was a car off, but then after two or three laps, they put out the full Safety Car for about three laps.

“That really helped the cars that had started on the Prime. For us, it was not good. I didn’t understand it. It was almost like it was just for drama; I don’t know. After that and the chance to change under the Safety Car, the guys on the Option tyre were much quicker. Also, I had a little contact with the front wing, not much damage but I locked up and hit the guy outside a little bit. I got a 5-second penalty for that and finished P16.

“Race 2, the start was OK. Also, I made a few positions after that again; the pace was good like yesterday. Until the Virtual Safety Car, I was P11. Then the engineer decided to change to the Option tyre. That was a really good decision as the pace on the Option tyre was much faster, so I was able to gain positions.

“It gave me the feeling that I could really attack and that strong feeling led to a collision in Turn 2, completely my fault and I damaged my front wing and had to pit to replace it. I think that the potential was there for P4, P5 and points, so that was a very disappointing race for me and I feel sorry for the team,” concluded the Honda Formula Dream Project driver.”

Carlin will hope for more when Formula 2 returns to Sochi in just under two weeks. 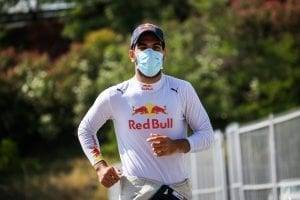