The opening six races didn’t reward the Carlin team with the results that the skills and pace of their two 2020 drivers deserve.

Both Red Bull Juniors of Yuki Tsunoda and Jehan Daruvala know that Silverstone could be a pleasant hunting ground for Carlin.

The 20-year-old Japanese driver has a pole and a feature race second to his name this season and could soon claim more. He suffered a “messy” weekend in Hungary, but the Honda Formula Dream Project driver was looking forward to a free weekend before the British Grand Prix.

Tsunoda will be hoping for a trouble-free weekend and will want to add to the second place he scored during race one at the second Red Bull Ring weekend.

Tsunoda said: “I have to reset my mentality and condition, then focus forward. I am focused on Silverstone. I like the track; it is high speed, and we tested there with Carlin during the lockdown in the UK with Carlos (Sainz) and Lando (Norris) in an old F3 car.

It was quite a positive test for me, so it will be an interesting weekend. It helps to have done a bit of track time there, so I am very much looking forward to it.

Meanwhile, the 21-year-old Indian driver will have to overcome a single problem that has cost him dearly, the starts. He will be hoping he has cured the bad starts he has had to make the weekend even better for him. In last years F3 race one at Silverstone last year Daruvala finished third.

Daruvala said: “As I said after the two races in Hungary, we know what the problem is, the bite point in the clutch. It is all about the start at the moment, dropping five or six positions at the start is always going to make my life difficult.

The problem is that the bite point changes from the formation lap to the race start. It’s not fixed, not consistent, so it’s really tough for me to know how much travel there is and where to place the clutch. We have two pedals, one for the bite and one we completely release. When the bite point keeps moving, it’s quite difficult.

“During testing, it was not moving. But now, somehow in the last two races weekends the bite point moves a lot. So, we’ve got to change the way we deal with it and take it into account, know how to deal with it and change our procedures because it is clearly not working for me right now.”

Carlin will be hoping to improve their fate and add to the one podium they have so far this season when Formula 2 continues in Silverstone.

Be sure to follow all the action this week with us here at insideF2.com. Check out our dedicated page for each round of the 2020 championship (Here) and also follow along with our LIVE Lap by Lap tracker for both race’s. 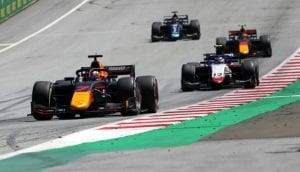