Carlin to field Fittipaldi and Maloney in post-season test

Carlin to field Fittipaldi and Maloney in post-season test

Brazilian driver, and new Red Bull Junior Team member, Enzo Fittipaldi will drive for the British team following a year and a half at Charouz, while 2022 F3 runner-up Zane Maloney joins the 21-year-old at Carlin.

Team Owner Trevor Carlin said: “We’ve got a great testing line up with Enzo and Zane. Obviously, Enzo already has great experience with the Formula Two car, so I have no doubt he’ll be able to hit the ground running and continue his progress in the car.”

Fittipaldi, who claimed six podiums in 2022, said: “I’m looking forward to the experience; three days will be pretty intense. It will be great to meet everyone and I’ll be working with them over the next three days to try and learn as much as possible.”

In November, the Brazilian joined the Red Bull Junior Team, saying it was a “great honour”, with Red Bull’s Motorsport advisor Dr Helmut Marko adding: “He (Fittipaldi) will be with Carlin, which is a top team.”

Carlin themselves have not yet announced their full driver line-up for 2023, but Fittipaldi would follow Red Bull reserve driver Liam Lawson in joining the team in Farnham.

19-year-old Maloney moves to Carlin, for the three-day test at least, after a first outing in F2 with Trident at the final round in Abu Dhabi, where the teenager reached the chequered flag in both races.

The “boy from Barbados” competed with Carlin in British F4 back in 2019 and, upon his return to the team, said: “I’m really looking forward to testing with Carlin, I’ve obviously spent two seasons with the team so I know a lot of the guys and girls.

“I’ll just be trying to learn as much as possible for what the future holds.”

Maloney enjoyed a superb run of form to close out the F3 championship, where he missed out on the title by five-points to Victor Martins, despite winning all of the last three Feature Races.

Carlin snatched second in the Teams’ Championship in the final race of 2022, finishing eight-points behind eventual champions MP Motorsport.

Drivers Logan Sargeant, who moves to Williams in F1, and New Zealander Lawson scored six wins for Carlin, the most of any team in 2022. 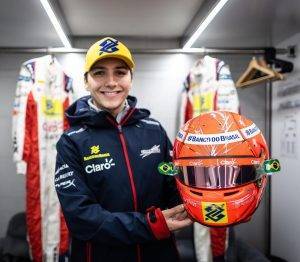