Cat and Mouse Chase for Zhou

Cat and Mouse Chase for Zhou

Guanyu Zhou‘s description of Sunday’s FIA Formula 2 Feature Race, was not dissimilar to that of a cat chasing a mouse.

Initially the Chinese driver knew that the launch for the Feature Race would be key to the overall result, because of the advantageous slipstream the Monza circuit offers to cars behind.

“It’s all about who can put a lap together and come out on top. It’s easy to pass but easy to make a mistake.”

Zhou qualified in third place and finished Sunday’s Feature Race in P2. Despite his hopes for a race win, he wasn’t disappointed with his performance.

“It was quite busy for me in the cockpit. I was able to stay with Oscar, after a good start.”

“I had a few tight moments out there, scrapping with a few Red Bull drivers.

“Jehan overtook me off track and I had to make my way forward again. The next lap he cut the corner. We touched wheels in Turn 4. I was worried about punctures, but got through.

“On the restart, I tried to brake as late as I could into the first corner, with Oscar being in front of me. I then tried to go on the outside but couldn’t make the move.

“Then I tried to jump ahead in the pit window.”

Maintaining second place, Zhou was very much aware Dan Ticktum was on an alternative strategy, that saw the Carlin driver’s race come to him after his late mandatory pit stop for soft tyres.

“I was trying to chase Oscar and I was hoping Théo [Pourchaire] would keep Dan behind.”

The ART Grand Prix driver couldn’t do much to hold back the steely Brit who soon saw off the first Sprint Race winner.

“I was watching ahead, and in my rear mirrors. With Oscar in front, and Dan behind, I was putting in quail laps, and both of us were giving everything those last few laps to stop Dan from catching.”

And like the cat chasing a mouse, Zhou was both predator and prey. Whilst pursuing a rapid, Piastri, the Alpine Academy driver was fleeing an unrelenting, Ticktum.

The top three finished the race in that order, following a final Safety Car.

Zhou’s two second places this weekend in Monza left him happy with the team’s achievement, though reflective on what still needs to be done:

“Concerning the championship, staying in the mix is what we wanted.

“As a team we need to be more consistent, as PREMA seem to be the most consistent team out there.” 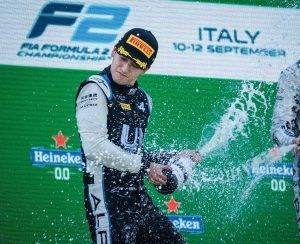