Championship Fight Not on Zhou’s Mind at Silverstone

Championship Fight Not on Zhou’s Mind at Silverstone

In spite of leading the 2021 FIA Formula 2 Championship, Guanyu Zhou says the title fight is not on his mind heading into Round 4 at Silverstone.

The UNI-Virtuosi driver currently sits at the top of the drivers’ standings on 78 points. Although his advantage over fellow Alpine Academy Junior Oscar Piastri has been cut to five points following his failure to score in the second Sprint Race and Feature Race in Baku.

Nevertheless, Zhou believes he and his British-based team can put in a strong showing on home soil once again to retain the championship lead.

“That’s the target firstly. At this stage, it is almost mid-season but still I am not thinking too much about the championship so there’s no need to think about it right now.

“In terms of our car performance, I think we seem to have a good car in these medium-high speed tracks, for example, Silverstone and Barcelona.

“Looking back to last year, I had my best finish at that point at Silverstone with P2 in the Feature Race before the victory in Sochi, coming from P8 on the grid.

“Looking at the races, we are extremely quite strong and also the Qualifying pace, not just last year also the year before, so I think in terms of the material we have it is going to be quite good.”

Silverstone has previously proved to be good fit for him and his British-based team, with Zhou’s former team mate and 2020 Vice-Champion Callum Ilott taking the Feature Race victory during the second weekend there last year.

Following the narrow streets of Monaco and Baku, drivers face a familiar challenge with the return to a more traditional race circuit presenting them with lots of overtaking opportunities.

As a result, Zhou believes a cautious approach is still going to be needed as drivers may be less risk-adverse during the opening lap.

“You’re going to be taking carefully Lap 1 at Silverstone. I don’t think it is a high risk of crashing, even though every start Lap 1 is a high risk.

“This weekend as we saw last year, the guys will have a great car to move forward so it’s not the end of the world if you lose one position on Lap 1, so should be a good one.”

The Chinese driver will be hoping to keep himself out of trouble this weekend to bring home a solid haul points, having already recorded three non-points finishes so far this season.

With the PREMA duo of Piastri and Robert Shwartzman hot on his heels, Zhou’s going to have a fight on his hands to retain the championship lead.

Will Zhou still be leading the championship at the end of Round 4? 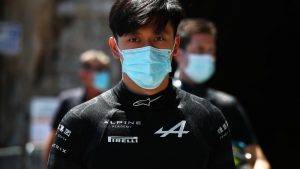