UNI-Virtuosi had an excellent qualifying as Callum Ilott and Guanyu Zhou will start the Feature Race in first and sixth, respectively.

Ilott has maintained his 100% record of qualifying within the top three this season with another pole position in Formula 2’s second visit to Silverstone. With the help of UNI-Virtuosi, Ilott adjusted the car to help acclimatise to the car at the Norfolk squad’s home race. However, the early part of qualifying didn’t go to plan, and Ilott was outside the top ten after the first few runs.

In the mid-session break, Ilott and the team made more changes, and he surged to the top of the leader board on his first lap back out of the pits.

With a driver spinning in the late stages of the session and some drivers not able to go quicker Ilott was able to claim pole and the four points which helped him close the gap on the championship leader who will start in 11th.

The points also help UNI-Virtuosi extend their championship lead at the top of the teams’ championship.

Ilott said: “Practice wasn’t great, I had to make a few changes after that as I didn’t really feel that comfortable.

“We went into qualifying, and the first run was quite difficult, I was really on edge and, we may have had a small issue.

“The next run we changed the car a tiny bit and improved, it was mega afterwards. Really happy with the work we were able to do as a team to improve the car and its paid off with a pole.”

Unfortunately, Chinese driver Guanyu Zhou was caught out by the late yellow flag. Renault Formula 1 test and development driver set the fastest first sector of anyone on his final flying lap but had to slow down when he reached the yellow flags in sector two as per the rules. Guanyu Zhou will start sixth on the grid.

Zhou said: “It was a pretty frustrating qualifying session from my side.

“The first set of tyres made some mistakes, but we improved the car. And then the second set, the first lap the tyres weren’t fully ready, and I knew I’d have time for a second lap, a second chance.

“In the first sector, went purple, by 0.2s compared to my previous lap. Unfortunately, caught the yellow flag, backed off, and then going into the last sector I had four cars in front slowing down on the racing line. It wasn’t ideal.

“Still did a lap time similar to my fastest lap but without the traffic and the yellow flag, it would have quite easily been a front row. Anyway, that’s how it is. We have good pace for the race.” 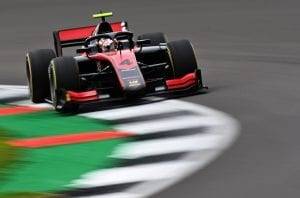