Fittipaldi finished third at Silverstone in the Sprint Race, adding to his podium earlier this season in the Feature Race in Imola.

“We are very happy, there was a lot of overtaking, but we have to say that we have top five speed. I am happy for Enzo and for the team of course,” Vavrik said.

Fittipaldi started Saturday’s Sprint Race at Silverstone from the front row, alongside PREMA Racing’s Jehan Daruvala, by virtue of the reverse-grid ordering for all F2 Sprint Races.

The 20-year-old Brazilian, grandson of double Formula 1 world champion Emerson, held his position in the opening laps before attacking leader Daruvala, who had overheated his wet weather tyres, eventually sweeping past on the outside of Club corner.

Asked about his feelings about Fittipaldi leading the race, Vavrik said: “We were all happy, but everybody knew that it was not finished. The track got drier and drier, so the guys who were overtaking more had less tyres.”

It appeared that Fittipaldi was a victim of his earlier success, as he made an error which allowed Jack Doohan to snatch a lead he would never relinquish.

DAMS driver Ayumu Iwasa also caught and passed the Charouz driver but Fittipaldi managed his tyres for the second half of the race, holding off ART’s Théo Pourchaire to secure an excellent podium finish.

Vavrik’s second driver Cem Bölükbasi finished 19th of the 20 finishers, but the Turkish driver has improved, according to Vavrik.

“Generally, we are happy, because now he starts to be competitive, so the work we made together, it’s had a big improvement on him.”

Further podium glory will be tough to come by in Sunday’s Feature Race, with Fittipaldi starting ninth and Bölükbasi 20th.

Lights out for the Feature Race is at 10:05BST, and you can join The F2 Show live, with host Fraser Ford and guests, on YouTube and Twitch immediately after the race. 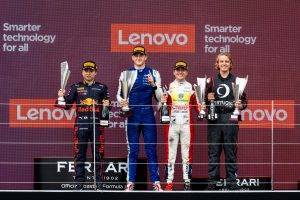