Following the post-season test, Charouz Team Manager, Kenny Kirwan, is certain that they are in for a decent shout in the 2022 FIA Formula 2 campaign:

“I’ve had the opportunity to have worked for a couple of teams, being Arden, and HWA, and you see the various aspects. I think the engineering side of Charouz is vey strong, it impressed me on my first weekend.”

The team’s most successful F2 campaign was 2018, where they finished in 6th place, scoring 218 points, lifting eight trophies. In 2019, they also finished P6.

“Back in 2019 the team were scoring podiums and some decent results. The aim is to get back into that sort of position.”

Kenny was pragmatic about the challenge, and considered it wouldn’t be easy because of the strong competition in the paddock:

“All teams are working particularly hard and are operating at a very high level and standard. We’re knocking on the door on F1 here, and so you wouldn’t expect anything less.”

His experience tells him it isn’t only the car and engineers that need to be in sync:

“We need to get the combination of our driver pairing right. So we have a driver with some experience, and a rookie. Or even two drivers with at least a year’s experience.

“Once we have that under control, we need to work on our one lap pace, on our qualifying. The rest will come.”

If the team do well on a Friday afternoon. He’s confident the rest of the weekend will take care of itself because he believes Charouz has a decent car:

“If we’re being honest, we have a bit of work to do on qualifying, It’s really key as it defines your whole weekend.

“Our main target is to rectify that situation. We’ve spent a lot of time here at the testing in Abu Dhabi trying to do that.”

With the 2021 season change in format, that included three races across the weekend, Kenny highlighted the pros and cons:

“If you’re out of the Top 8 and you can do something on a Saturday where you can move forwards, where you can go in a reverse grid situation for Race 2, then you can have a decent Sprint. But you have to reset again for Sunday, which is where you originally qualified.

“So you can have a fantastic Saturday but then it’s all forgotten about really quickly.”

All of this will once again change for 2022, after the three race format was revised by Formula 2 CEO, Bruno Michel, Formula One CEO, Stefano Domenicali and Race Director, Michel Masi in an agreement that was announced in September this year. 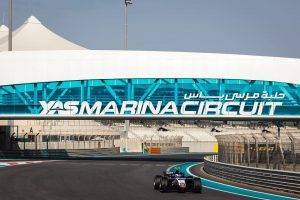