Enzo Fittipaldi finished the qualifying session in P16, and Cem Bölükbasi in twentieth.

“The potential was there for the qualifying [with Fittipaldi] as you can see.”

On the first run, Enzo crossed the line in P10. An impressive start for the young Brazilian, who was involved in a possible career changing shunt, with Théo Pourchaire, in Jeddah last season.

“On the second set he doesn’t improve anymore, there was traffic.”

Fittipaldi finished the qualifying session in 16th place. He’ll have his work cut out for him in both Saturday’s Sprint Race and Sunday’s Feature, but he has a spirit about him that indicates he’ll give his all, wherever he starts on the grid.

On the other side of the garage, Bölükbasi also faired well after the first stint, pitting in P16. The final result, the Turkish eSport’s racer who’s transferred his sim racing abilities to a real life cockpit, rounded up his qualifying session in 20th.

“He jumped over one championship so expectations are maybe high. But we need to be realistic, he doesn’t go to F3 which is preparation for this one, so I’m happy where he is and I think it looks really good.”

Bölükbasi has seen mixed results in both testing sessions in Abu Dhabi in December, and in Bahrain just last week. His potential is obvious, and his passion and hunger to succeed, tangible.

Both Fittipaldi and Bölükbasi are expected to make up a few positions in the opening laps. Tune in to both races to discover how they finish! 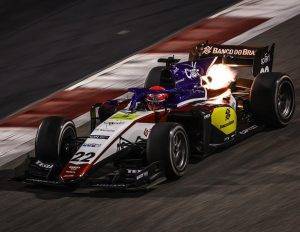