Cordeel ‘We Did the Right Changes’ to Qualify P8

Cordeel ‘We Did the Right Changes’ to Qualify P8

Amaury Cordeel took his second-best qualifying result of the 2022 FIA Formula 2 Championship with eighth place for Round 14 at the Yas Marina Circuit in the United Arab Emirates.

Van Amersfoort Racing rookie Cordeel has experienced an upturn in form in the last two rounds, finishing sixth in the Feature Race at Zandvoort and seventh in the Monza Feature Race a week later.

For both of those races, he qualified 12th, also a marked improvement from his early-season results.

After finishing 13th in practice, Cordeel ended qualifying for the season finale just 0.288 seconds off polesitter Ayumu Iwasa’s best lap in a session that saw the top 14 drivers covered by less than four tenths.

Cordeel spoke to InsideF2 after qualifying and said that he could have extracted even more pace from his Dallara F2 2018 machine.

“I still did a little mistake in the lap in qualifying, which cost us also a few positions because it’s quite tight at the top. But I think we did the right changes on the car and by myself just to put it together.

Cordeel said that in the 67-day gap between the last F2 race at Monza and the start of this weekend, he was spending time on the simulator and testing.

“We kept it busy doing some sim work over the long period of waiting. I also did some tests in another car. That helped to stay busy,” he told InsideF2.

“I’m feeling good. P8 in qualifying, I think it’s a good position for the race to fight for the top positions.”

Abu Dhabi’s Yas Marina Circuit is a happy hunting ground for Cordeel, who took his first single-seater win at the venue in February 2018 in the F4 UAE Championship.

On his last visit to the circuit in the 2019 Formula Renault Eurocup, Cordeel took two ninth places for his only double points finish of that campaign.

After hosting the Abu Dhabi Grand Prix in December in the past few years, Yas Marina returned to a mid-November calendar slot this year. The temperatures were noticeably warmer than in years past, reaching 34 degrees Celsius during qualifying on Friday afternoon, but Cordeel wasn’t bothered by it.

“The heat – it’s Abu Dhabi,” Cordeel said. “You have to deal with it. You have to drink a lot of electrolytes, but for me, it’s fine.”

Joining VAR this weekend alongside Cordeel is Juan Manuel Correa, who makes his F2 return more than three years after sustaining serious lower body injuries in an accident in the 2019 F2 Feature Race at Spa that took Anthoine Hubert’s life.

Correa’s self-described ‘surreal’ return comes after two seasons spent with ART Grand Prix in F3. He replaces David Beckmann, who was likewise drafted in to replace Jake Hughes before Round 9 of the season in France.

Cordeel says that Correa’s prior F2 experience has already helped VAR as they conclude their first F2 season.

“He’s fast,” Cordeel said. “[Since the accident, it’s] his first weekend, so I think he did a good job.”

While Correa will face an uphill climb from 18th in both races, Cordeel starts third for Saturday’s Sprint Race, putting him in a strong position to take his and VAR’s first podium in F2 – or even a maiden win.

“The goal is always to win. I think in practice, we saw the degradation was not massive on our car, so that’s already a good point, but we’ll have to see tomorrow because every day is a different day.” 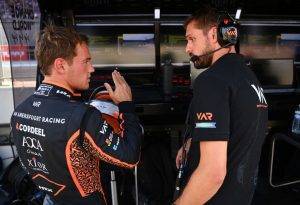