Juan Manuel Correa says it feels “surreal” to be making his FIA Formula 2 comeback this weekend. After three years away, Correa will return to the F2 paddock in Abu Dhabi, driving for Van Amersfoort Racing.

Speaking to F2 media ahead of the weekend’s action, he said: “It’s a bit surreal, because it’s been a long time and I’ve had this goal for three years. I’m delighted to be here.

“It’s no secret that I’ve been working hard to get a seat [in F2] for next year, and for me to be here this weekend is definitely a big step in the right direction.”

Friday’s Practice session will be the first time the 23-year-old has driven in an F2 race weekend since he broke both his legs in the accident which took the life of Anthoine Hubert in Spa in 2019.

Looking ahead to his return, Correa said: “The car is fundamentally the same one I raced in 2019 except for the 18-inch tyres. I think it’ll still be challenging to jump in, even if I did this category three years ago, it feels like a lifetime ago with everything that’s happened, so I’m just taking it step by step.”

Back in 2019, the American-Ecuadorian demonstrated his talent by achieving two podiums in his debut season in Formula 2.

Setting out his expectations for this weekend, he said: “My first goal is to get comfortable with the car as quickly as possible. Every time I’ve jumped in an F2 car I get used to it quite quickly so I hope that continues.

“I would like to score points in the weekend. Of course I would love to win but it’s difficult to say when you’re just jumping in like this. If I have a clean weekend and feel like I’m being efficient with the car that is the most important.”

Correa becomes the fourth different driver to feature for VAR this season, as he replaces David Beckmann who scored points in the Sprint and Feature Race last time out in Monza.

That weekend was the team’s most successful of the season, and Correa has already been impressed by the Dutch outfit. He said: “It’s a very young team, they know they’re not at the level they want to be but they’re hungry to get better. For me that’s a really nice challenge to be part of.

“They’ve surprised me already because I can see the drive they have and I really believe they will be a top team in the near future.”

Juan Manuel does not yet have a seat confirmed for next year, but will hope that his performance this weekend can help his cause as he chases a full-time return to F2. 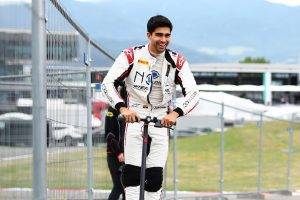