Juan Manuel Correa discussed with us the mental challenges he faced on his road to recovery. He gears up for a return to racing in 2021 with ART in FIA Formula 3.

The Ecuadorian-American has now based himself in Barcelona for this year’s Formula 3 championship. He spent the winter of 2019 and the whole of 2020 recovering from the injuries he sustained at Spa Francorchamps, which put him in an induced coma.

As well as the physical ailments that Correa endured, there were so many mental challenges that Correa also had to battle after the accident.

Speaking on this, Correa talked of how these struggles affected his road to recovery, and how they gave him plenty of motivation to keep working.

“I think the hard parts and the bad days actually were the biggest push for me as I wanted to get out of that state.”

“I actually felt that later down the line as I felt more comfortable, I got into a comfort zone and for a few weeks, I lost my motivation.  That’s when I had to snap out of it and tell myself, hey, you don’t want to spend another year in a wheelchair, you have to start driving in four to six months.”

Despite the challenges that he has faced, Correa has made it back to the cockpit for the 2021 season with ART Grand Prix in Formula 3.

“It’s been a very long journey and a tough one, so of course that makes it pretty sweet to be in this position. I am proud of myself, proud to have put myself in this position after such a short space of time. I am excited to get back behind the wheel.”

The deal with ART came about in late 2020 when Correa spoke with ART team principal Sébastien Philippe on his return to Spa.

“Around autumn last year was the moment I realized that it would be possible to drive again. Once I saw the progress I was making,  I started to talk to teams, ART immediately showed a lot of interest and believed in me.”

Correa will still continue his rehabilitation as the season goes on where he hopes to be fighting for the Formula 3 championship.

“Even now there are still many unknowns, the rehabilitation process is still continuing. I see this as a transitional year where I will be driving, but at the same time there is still a lot of work behind the scenes to be done, small surgeries now and then so it will be a pretty busy year.”

Despite all the setbacks Correa has his eyes still firmly set on Formula 1 and hopes this is just the start of his new #RoadtoF1.

“Formula 1 is still my long term goal that has not changed, it was one of the main reasons why I wanted to lose as little time as possible. My goal has always been Formula 1 and I want to get back on the train and climb up the ladder. Hopefully, I can become the first American to race in Formula 1 for some time.”

Regardless of how the results turn out Correa is just happy to be back at the track.

In our last interview with Correa, we talked about him hoping for a cameo with Alex Jacques in the Formula 2 commentary booth. Although he may be a little busy this year this is something he still wouldn’t mind doing. (Read: Correa’s road to recovery)

“I would love to co commentate, we never got round to doing it but I’ve got a lot to learn from Alex! I would hope to bring some good insight.”

“I am excited to see everyone at the races, part of what I missed last year was not only the lack of adrenaline and speed but the whole motorsports family which travels to all these events. At the end of the day when you’ve been doing this for half of your life, they become like your second family so I am excited to see everyone again in Barcelona.”

The Formula 3 season begins on the 8th of May in Barcelona. 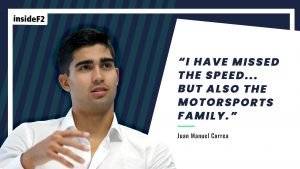