“It was the craziest race I’ve ever done in F2. It was insane. We had a really good strategy when we did the pit stop, I think on Lap 8 or 9, to put the softs on. But one of the tyres wasn’t going in and I lost 10/15s in the pit stop. I was really disappointed as I think we would have come out in the top six or seven. I just kept my head cool, knowing we’d lost a lot of time, and I focussed on nailing the laps and not making mistakes. Don’t give up. Keep pushing.”

The race was a mixed one for the Charouz driver, with having a good car underneath him, but being hampered by events going on all around him:

“Little by little there were some guys behind me with some fresher tyres. I just let them by, and the guys that had fresher tyres in front of me were battling like crazy. As the race was going on, because I’d conserved my tyres quite well,  I was catching up.”

Once he did catch up, the five car battle almost cost Fittipaldi his race finish after making contact with Richard Verschoor  who spun out with a DNF:

“I went for a move on Nissany on the inside, did my braking, and Verschoor missed the corner. He went wide and tried cutting across. I was doing my corner and he just came across and hit me, and obviously we had contact and he broke my front wing. I thought my race was over, I thought my suspension was broken. I was about to park my car on the side and then something told me to just try to make it back to the box and we went, on three wheels to do the pit stop.

“I think the pace was ok from the middle to the end. But from the beginning to the middle of the race we struggled a bit. But for sure that pit stop problem that we had cost us a lot of time, it cost us a top 10.”

The final laps were all about taking advantage of a different set of tyres and a nose change:

“I changed the front nose, and we put on some hard compound, came back out and we just made the group. I was pushing for my life to make the group and we made it within one second. We did the restart [after the second Safety Car of the session] overtook two cars into Turn 1 and then overtook Sato into Turn 11 and finished in P11. It was a crazy race.”

Overall, the Charouz car looked and felt good the second half of the race. And while a Safety Car can aid drivers into a better fishing position, it isn’t always the case:

“Things like this happen and it’s just racing. And I’m looking forward to the next race in Jeddah.” 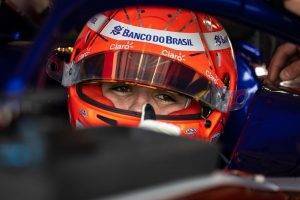