Following the success of the 2019 Formula 2 Teams’ and Drivers’ Championships, expectations were high as veteran Sean Gelael and rookie, Dan Ticktum, took on the 2020 challenge.

The first weekend at the Red Bull Ring saw gearbox issues during both Feature and Sprint races. He finished a more respectful 10th and 7th at the Styrian Grande Prix.

Starting the Hungarian Feature Race from ninth, he was the final car to be classified after a technical issue hampered his race. Sunday saw him do better. A P12 for the Indonesian.

Qualifying in 16th at Silverstone, Gelael only made up one place during Saturday’s Feature Race, despite climbing to P7 during the pit stop rounds. He retired during Sunday’s Sprint Race with a wheel issue.

A DNF in Saturday’s 70th Anniversary Feature Race and a non-starter for the Sprint saw another tough weekend for the Indonesian.

Gelael’s fortunes continued to worsen in a clash with Jack Aitken in the final laps of the Spanish Feature Race. Landing awkwardly on a sausage kerb, the DAMS driver had no choice but to retire. It was later confirmed he had a fractured vertebrae in his back.

Starting the Bahrain Feature Race in P18 the returnee made up five places to finish 13th. He secured 14th on Sunday.

Qualifying 22nd the DAMS driver made up three places to finish 19th on the Saturday, and P17 in the final Sprint Race.

Gelael finished the season in 21st.

Scrutinising eyes were on the young Briton as he came into Formula 2 with a ‘bad boy’ reputation. Throughout the season he’s answered critic’s questions by doing his talking on the track – Four podiums and an abundance of lightening starts and on-track battles has seen to that.

The first Feature Race of his Formula 2 career saw Ticktum finish in a solid fifth place, after pulling some great overtaking moves on Christian Lundgaard and Louis Delétraz in Austria. This meant he’d start fourth on the grid the following day. Lights out, and Ticktum was quick to pull up alongside Delétraz. Following a Safety Car restart, he retook his P3 from Marcus Armstrong and claimed his first podium in Formula 2.

A rain affected Styrian Feature Race saw Ticktum take P8. From reverse grid pole the following day, he got away well but couldn’t maintain his lead against a charging Lundgaard. The Brit clung onto P2, finishing on the podium for the second time in consecutive weeks.

Hungary saw Ticktum storm into P2 on the Feature Race start. Following a Safety Car, the Brit pitted for medium tyres, only to see them fall off quickly. Struggling for grip only a P9 was achievable. Another lightening start saw Ticktum gain four places in the Sprint Race. However, a rare engine issue meant a disappointing DNF.

P12 on the starting grid of the Silverstone Feature Race saw Ticktum leap four places to eighth. Reverse pole on Sunday, and a perfectly managed tyre choice, that even a pursuing Lundgaard on fresher rubber could do nothing about, meant a maiden victory on home soil. Leading the race from the start, Ticktum rose to the occasion and delivered.

“The first five laps were pretty close, then in the middle of the race I controlled it pretty well. The management of the tyres and the setup, with what we did with the aero balance was very good. At the end, if we had one less Safety Car lap, he [Lundgaard] would have passed me. The last three laps were absolutely flat out.”

Ticktum’s P4 in Qualifying gave him an opportunity to once again fly into second position on the race start of the 70th Anniversary Feature Race. Skidding off the road on Lap 4 saw Mick Schumacher catch and tussle for position. Nikita Mazepin followed suit, pushing Ticktum down to sixth. Slipping down the order the Brit finished P15.

The following day, Ticktum worked impressively hard to make it into the top eight, and was gifted a one place bonus after Schumacher and Robert Shwartzman clashed on track. The Brit’s P7 was a deserved result.

Ticktum grabbed vital points on an average weekend in Spain, with a ninth on Saturday and a P10, Sunday, following a late stop for tyres.

Missing Practice at Spa-Francorchamps because of an inconclusive Covid_19 test, Ticktum’s absence from the session may have been a factor as he qualified P14. The Feature Race saw him make up eight places to finish in P6. Another exceptional start in the Sprint Race saw Ticktum take a brief lead. Tussling with an unrelenting Roy Nissany saw the two collide and Ticktum fell down the order, receiving zero points for his weekend’s efforts.

Saturday in Monza, Ticktum briefly led the race while the pit stops shook themselves out. He finished in P7 making up three places from his qualifying position. A masterclass Sprint Race saw Ticktum win his second race of the season, only for the Brit to be subsequently disqualified because of an unsuitable post-race fuel sample due to a leak in the fuel tank. A harsh punishment for driver and team who weren’t directly at fault.

Ticktum qualified well on the quirky and surprisingly delightful Mugello track. A P2 Feature Race start and alternative strategy looked to be working well, as he led the race until his pit stop. Emerging in P10 he ensued in a battle with Ilott and Yuki Tsunoda. Following a Safety Car restart, the Japanese driver ended hopes of a good result for both as he was deemed to have unfairly thrown the Brit wide – Ticktum fell down the pack to 17th.

Qualifying in P17 at Sochi, Ticktum drove a tenacious race to finish in 10th. Sunday’s Sprint Race was cut short after Jack Aitken and Luca Ghiotto had a sizeable crash on Lap 7. The barriers needed extensive work and the race was red flagged. Ticktum classified in eighth.

Sitting third on the grid Ticktum’s Bahrain race weekend went backwards with a A P9 on Saturday and 12th on Sunday.

Finishing the Feature Race in eighth meant the British driver would be on pole for the final Sprint Race of the season in Sakhir. After making up five places his season ended as it started, with a P3 podium.

It wasn’t the fairy tale end Ticktum wanted. But his rookie season has been respectable and strong. Classifying in P11 doesn’t fairly represent his unbounded performance. Next year’s title could be his for the taking.

Qualifying wasn’t a great success for the replacement driver of the injured Gelael. An issue meant he didn’t register a time. Therefore, a P11 in Saturday’s Feature Race was an achievement. After stalling on the formation lap and starting the Sprint Race from the pit lane, Vips fought through the field to take a second P11.

Qualifying in 11th, Vips maintained his position in Monza’s Feature Race. And Sunday saw him finish in P10. (Promoted to P9 after Ticktum’s DSQ.)

The young Estonian earned his first points in Formula 2 during both Mugello Feature and Sprint races. Topping the Practice sheets and qualifying in P7 the weekend looked to be his for the taking. If he hadn’t have been given a grid-place drop for ‘impeding’ who knows what could have been. Vips’s first Formula 2 podium came in Sunday’s Sprint Race.

Being hit from behind on the first lap of the Feature Race and promptly retiring, Sunday’s Sprint Race didn’t see any opportunity to improve after it was red flagged. Not an ideal finish to Vips’s brief spell in Formula 2 but after his memorable efforts we will see him back on the grid sometime in the future.

2020 turned out to be a tale of two very different seasons for both main drivers. Whilst Gelael suffered bad luck with mechanical failures, non-starts, and a freak injury, Ticktum enjoyed plentiful opportunities.

The rookie stole the show and finished every race, bar one, above Gelael.

Vips’s contribution made for an even more enterprising addition. The young Estonian didn’t disappoint.

There’s work to be done for the team to bounce back in 2021. 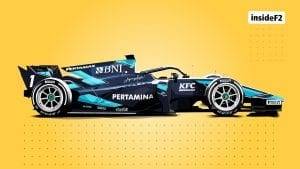