DAMS finish the 2022 season on a high

DAMS finish the 2022 season on a high

The last FIA Formula 2 weekend in 2022 has been nothing short of a roller coaster of emotions.

French racing outfit, DAMS, left the best for the rest as both drivers, Ayumu Iwasa and Roy Nissany, stormed to lock out the front row for the Feature Race on Sunday.

“Qualifying was a special day, with lots of hard work paying off,” said the DAMS driver Nissany. “We had plenty of time ahead of this weekend to analyse all the data from the season so far and we saw the results of that with a front row lockout.”

“We had a great car throughout and I was able to finish in the points on both days, even if the Feature Race wasn’t my best performance,” Nissany continued. The second-position qualifying didn’t translate into a podium as Roy Nissany only managed to finish 10th in the Feature Race.

The Williams reserve driver thanked DAMS for their faith in him for the last two years and wished them all the best.

DAMS Team Principal, Charles Pic, was all praise for both his drivers. He said, “It was a beautiful weekend of results and an amazing way to finish the campaign.

“In qualifying, the set-up was perfect for the conditions and the drivers did a great job, so it was an all-round excellent performance. Both cars got a great start in the Feature Race, with Ayu maintaining the lead.

With Ayumu Iwasa leading the race on Sunday, it was crucial for the team to get the strategy right. The Team Principal further added, “We had a few issues with overheating, which is why we pitted early, but Ayu was able to keep up his strong pace and take the victory.

For the Japanese rookie, it was not all smooth sailing as Formula 2 champion, Felipe Drugovich, was hot on his tail. Using every inch of the tarmac, Iwasa held on and took the second victory of his career.

“It’s the ideal way to cap off 2022 and shows exciting signs for the next season. On behalf of the team, we say thank you to Roy for his efforts in his two years with DAMS. He’s a dedicated and passionate driver and a great person to have around the garage,” said Charles.

DAMS finished the season sixth in the teams standing and will be hoping to improve next season. 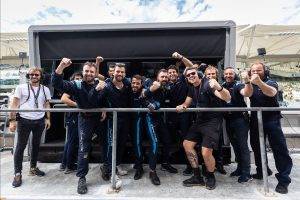