But despite the win and his two back-to-back podium finishes in both Austrian Sprint Races, Ticktum is already looking forward.

He’s focussed on improving and his target is the Feature Race at this weekend’s second event at Silverstone.

His thoughts for the race weekend ahead are on qualifying. He knows that finishing high in the order on Friday is the safest way to stay out of trouble for Saturday’s Feature Race.

We need to improve our qualifying pace.

Commenting on how strange the circuit was without fans he said he still felt like it was a really special win to do it at home.

With the National Anthem playing for him on the podium, it was a memorable and historic moment for the DAMS driver.

From the outside it can look like having back-to-back races is hectic and unenjoyable.

Contrary to this Ticktum stated how he really liked having races in quick succession because there’s an element of processing the race weekend he’s participated in and then moving on quickly, getting straight back in the car for the next instalment.

He came across as relaxed and has found time for a little obligatory fun this week.

He casually dropped into the conversation about having his face scanned for the official Formula 1/Formula 2 Championship Codemasters video game.

He laughed at the thought of how accurately they may or may not create his face.

Ticktum is currently a development driver with Formula 1 team, Williams. When asked, he said:

Unfortunately this year I haven’t been able to visit the factory that many times. The busiest time for me as a development driver was supposed to be when we were all locked down.

However, he said the winter test he did was good. He was able to get an understanding of how the team operated which is a bonus if he embarks on a Formula 1 career with them.

Ticktum explained the sim role he had was similar to his Red Bull Junior experience. Comparing the two he said there was a lot of overlap and similarities.

The positive news is he recently had a seat fit with the Williams team. But he thinks any kind of Practice opportunity isn’t on the cards this season.

There were possible tones of regret in Ticktum’s voice as he explained how close he was to being there a couple of years ago.

If it wasn’t for the Red Bull Junior team letting him go he may already have Practice sessions under his belt, as well as all the other opportunities an development driver enjoys.

He’s well aware he would be doing better should he already have a couple of years in Formula 2.

However, he remained positive about his misfortune,

It’s all about how I bounce back.

From his candid response it’s clear to see how inspired by Lewis Hamilton, Ticktum is.

Hamilton is well know for his Still I Rise mantra. A powerful stimulus young drivers will be sure to  aspire to.

Ticktum also has James Hunt on his inspirational list, whom he mentioned when I asked him this earlier in the year:

‘Which driver from the past or present would you like as a teammate and why?’

To read his response here’s Dan Ticktum’s Home While Away interview.

Whilst having a clear eye on his driver heroes, Ayrton Senna included, Dan was clear when he stated he wanted to try and write his own history.

Already having a third and second place at both Austrian Sprint Races, plus his Sprint Race win last weekend, Ticktum is keen to bag his first Feature Race win to add to his growing trophy collection.

He spoke generously about his teammate Sean Gelael, who has had a difficult start to his Formula 2 championship.

He’s a lot better than what a lot of people think of him. He’s just been really unlucky this year with mechanical failures.

As well as having all-time heroes it’s good to see the respect Ticktum has for his peers.

He respectfully mentioned this year’s Formula 2 championship has a lot of strong rookies. He said what they may all lack in experience the talent makes up for.

And he remains philosophical for the 2020 season,

If I can finish ahead of the other rookies this season than I’ve done a good job, even if I don’t win the championship. 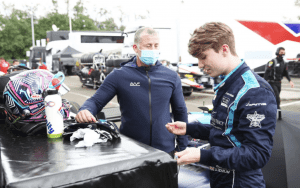