Christian Lundgaard took a superlative win to reach the top step of the podium in the Formula 2 Austrian Sprint Race!

The Dane executed a stunning dive bomb into Turn 2 stealing the lead from Dan Ticktum to secure his maiden win in Round 2 of the 2020 championship.

Lundgaard was keen to make amends in the Sprint Race after a disappointing Feature Race that saw his ART beached in the gravel trap at Turn 4.

At the start of the Sprint Race pole sitter Ticktum got away well with Lundgaard jumping his ART teammate Marcus Armstrong for second place as the field raced up the hill to Turn 2.

Formula 2 Feature Race winner Robert Shwartzman had a disastrous start. A spin into Turn 1 caused the Russian to retire triggering the virtual safety car while debris was removed from the track.

From a very good day yesterday to a very bad day today, it’s something to learn from. You just have to keep working and learning.

Otherwise the pace throughout the weekend was great.

Marino Sato was next to retire from the race with a technical failure. The Japanese driver’s Trident failed to get back to the pit lane and he pulled over into a side road.

At the restart Lundgaard took the lead from Ticktum up into Turn 2 after producing a gusty late manoeuvre to pass him for the lead, despite the Brit’s counter-attacks into Turn 3.

Lundgaard quickly pulled away from Ticktum with the Dane producing two successive fastest laps. The gap extending to just over two seconds – a DRS cushion for Lundgaard.

Further down the order Roy Nissany and Giuliano Alesi went into combat for 15th place. The Israeli coming out on top.

As Armstrong and Mick Schumacher mounted their attacks on Ticktum the Brit held onto his second position.

Nissany proceeded to undo all his good work by damaging his Trident through a collision with Louis Delétraz into Turn 7 causing the Israeli to pit for new rubber and be put under investigation by the race stewards.

Schumacher began his charge by passing Armstrong around the outside for third place on Lap 12 with the German just managing to get the move completed.

Schumacher’s successful move didn’t last long. His PREMA car’s fire extinguisher exploded on the approach to Turn 7. This caused Schumacher to retire from the race in what had been a testing couple of weekends for the German.

I had a great start and a good pace. It’s a pity because a podium would certainly have been realistic.

If our car works as well in Budapest, we’ll be a strong contender in Hungary, too.

Schumacher’s retirement promoted Armstrong back into third place ahead of the Virtuosi pair of Guanyu Zhou and Callum IIott, and Campos’s Jack Aitken.

With less than 10 laps to go Ticktum was given the hurry-up by his DAMS’ team to catch Lundgaard for the lead. He pushed hard, locking up his wheels multiple times.

Behind Aitken, the battle for the final point-scoring positions heated up. Sean Gelael tried to hold onto his seventh place ahead of both Hitech’s Nikita Mazepin and Luca Ghiotto – with the sole Carlin of Jehan Daruvala also in the hunt.

Because of the fresh tyres he managed to remain unlapped. This caused Lundgaard to suffer confusion as to why he couldn’t catch him.

In the last two laps, IIott closed in on his teammate, Zhou, for fourth place with the Brit closing on the Chinese driver lap by lap as the Ferrari junior bided his time to make a late lunge.

However, Zhou managed to get DRS up to Turn 2, which ended all hope of IIott snatching fourth place at the line – much to the relief of the Virtuosi management.

No one could catch Lundgaard who took his maiden win ahead of Ticktum who secured his best finish in Formula 2. Starting on pole after the reverse grid from the Feature Race result, Ticktum said,

Pretty much every lap was within a tenth and I was right on the limit. I think if we do more good work over the next few days, we’ll be able to challenge for victories.

Zhou, IIott and Aitken, who had a relatively quiet race, completed the top six with Gelael and Mazepin taking the final two point-scoring positions.

Daruvala and Ghiotto rounding out the top 10, missing out on the points.

Lundgaard took the two bonus points for fastest lap of the race to cap off an even sweeter day for the Dane. 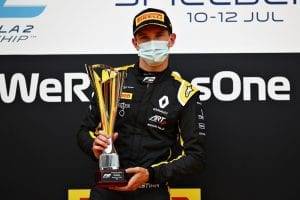