Jehan Daruvala was pleased to end his 2020 Formula 2 season on a high by taking his maiden victory in today’s Sprint Race.

After achieving his first F2 podium in last weekend’s Feature Race, the Carlin driver capitalised on his team’s momentum at Sakhir.

He said: “It feels very good to finish the season on a high. It’s been, in general, a tough year for me.

“Things have been getting better and better, and to finish the season with a win is the best result I could really ask for.”

Bahrain has proved to be the prime hunting ground for the Carlin team, with Daruvala’s team mate Yuki Tsunoda taking second place in today’s race after winning the Feature Race yesterday.

The team’s success over the past fortnight has seen Carlin overtake Hitech to snatch third in the teams’ championship on 272 points.

Both Red Bull juniors’ thoughts now turn to the future. Achieving third in the driver’s championship has meant that Tsunoda has earned enough points to secure a super licence.

It is rumoured that the Japanese driver will be lining up along Pierre Gasly for AlphaTauri in 2021.

The future for Daruvala is less certain after finishing 12th in the standings after a difficult first half of the season.

He said: “I hope, I think I will be back here next year in the FIA F2 Championship. Hopefully, this win gives me some confidence to be a contender for the title next year.”

The Formula 2 post-season test will take place from December 8-10 on the Bahrain Grand Prix circuit. Daruvala is expected to be taking part. 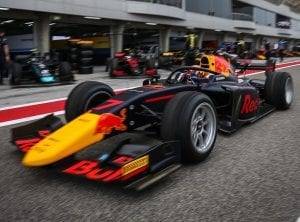