Jehan Daruvala wins a chaotic Feature Race in Monza as he stands on the top step for the first time since the last round of 2021.

Early drama for the Feature Race’s pole sitter, Jack Doohan as he stalled on the formation lap. Luckily for him, he managed to get going again and reclaim his position before the safety car line. He later reported issues on his clutch before the lights went out.

Doohan struggled off the line and was immediately overtaken by Liam Lawson behind. After Turn 1, Lawson led our newly crowned champion, Felipe Drugovich before Marcus Armstrong made his way up to second place just before the safety car.

Behind them, multiple drivers were involved in different incidents. The first was between Ralph Boschung and Théo Pourchaire as Boschung ran wide at the first chicane. He caught Pourchaire’s tyre which sent the pair into the barrier. Also caught up in the incident was Luca Ghiotto who ran into the spinning ART.

The second incident was between Doohan,  Jehan Daruvala and Logan Sargeant. Doohan braked late going into the Della Roggia chicane and crashed into the side of Daruvala’s car. As he went through the escape road ahead of Turn 4, he caught Sargeant’s Carlin on the outside of the corner. It was later confirmed that Doohan’s steering wheel failed which would explain why he struggled to break down his speed ahead of the chicane.

Confusion for David Beckmann as he was told on the radio for the formation lap to pit for new tyres due to a puncture. He dropped to the back of the field during the safety car as a slow stop kept him held for a little longer than he would’ve liked.

The safety car came out again on Lap 8 of the race for Calan Williams who crashed while racing against Beckmann.

Armstrong was the first driver to make a mandatory stop from second position. He dropped behind Daruvala and Ayumu Iwasa to fifth, but was given a 10 second time penalty for crossing the bollard at the pit entry. Lawson pitted on the next lap which dropped him to 10th position.

The red flag was thrown since a vehicle was needed to recover the Trident of Williams. This put his teammate, Richard Verschoor into the net lead of the race. However, the leading two (Verschoor and Marino Sato) still needed to make their mandatory stop, despite being able to change their tyres during the short red flag period.

Armstrong’s day was set to get much worse as he was given a 10 second stop-go penalty for speeding into the pit lane after making the late call before the red flag. After contending for the win at the beginning of this race, the Hitech driver found himself at the back of the field with a long gap to the next driver in 13th.

Jüri Vips made contact with Lawson in their fight for eighth at the Ascari chicane. He made a late move which resulted in a spin for Lawson and front wing damage for his Carlin, forcing him to pit. He was awarded a 10-second stop- go penalty for his part in the contact.

Sato eventually pitted from third position on Lap 21, Verschoor still led the field since he was yet to stop. The highest placed driver who had taken their mandatory pit stops was Daruvala. The Indian had struggled ahead of this weekend but has had a great change of luck after a podium in the Sprint and a strong Feature Race.

Verschoor finally pitted from the lead on Lap 25, he came out in tenth position, just behind Clément Novalak.

Daruvala took his first win of the year after perfectly executing his strategy for the race. He would be joined on the podium with Vesti, like yesterday, and fellow Red Bull academy driver, Iwasa. 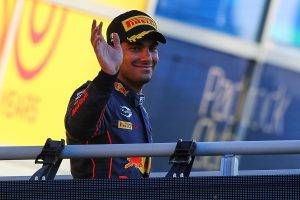