Jehan Daruvala won the first Sprint Race of FIA Formula 2’s season finale in Abu Dhabi to end his season on a high.

The Indian driver started Sprint Race 1 from pole after not finding the pace in the qualifying session and ending Friday tenth fastest.

However, Daruvala made no mistakes to finish the race where he started, showing his defending skills to keep the chasing Felipe Drugovich behind.

The final Feature Race of the season had Daruvala starting in tenth and hoping for even more points for a late-season boost. However, a penalty meant that the 23-year-old finished just outside of the points in 11th.

Speaking at the end of a busy weekend, Daruvula said, “I converted the Pole Position into a strong victory yesterday, then again bagged some points in Race 2. So overall a decent day on Saturday.

“Today, I went for the alternate strategy. I actually made up some positions on Lap 1, but there was a lot of chaos in Turn 6; a couple of cars cut the chicane and came out ahead of me but didn’t get any penalty.

“That was a bit frustrating, and then I got a five-second penalty for speeding in the pit lane when I boxed near the end.

“I thought I pressed the pit limiter button, but it didn’t activate, so I went over the 60km speed limit. So, I should have scored a couple of points but missed out.

“All in all, I think it was a strong weekend, good to end the year with a win, and now I am looking forward to the postseason testing and next year.”

Thanks to the Sprint Race win, Daruvala ended the season seventh in the championship with 113 points.

While Daruvala has not yet announced what he is doing next year, he will be hoping the pace shown this year will help him get a seat somewhere in 2022 that helps him continue to grow like he has this season. 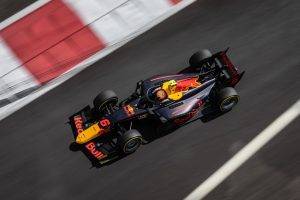