Daruvala: “I deserved a lot more for the speed I had”

Daruvala: “I deserved a lot more for the speed I had”

After being penalised twice, Carlin‘s Jehan Daruvala believes his pace deserved more than he got in his tough FIA Formula 2 weekend in Saudi Arabia.

Daruvala’s efforts to bring home good results from the weekend were all in vain even as he fought to cross the line in fifth place in Sprint Race 1.

His contact with his team mate, Dan Ticktum, cost him five places in the race classification, making him feel incompetent even though he believed it was a 50/50.

“Had a really good first race, had a lot of pace, made a good double overtake. Drove all the way up to fifth only to get a penalty for gaining an advantage by cutting the track, overtaking my team mate. So I got put back to 10th,” explained Daruvala.

Starting Sprint Race 2 as the reverse grid pole-sitter, Daruvala dominated the race before he undercut the championship leader, Oscar Piastri, to receive a five-second penalty.

Piastri claimed his fourth win of the season, extending his championship lead. In contrast, Daruvala could not hold onto first place and spoke frankly about the incident.

“So I started Race 2 on pole. I think everyone has seen that race. I was obviously blocking Piastri in turn one, a huge lock-up, I came back on track, I gave up the advantage I had before the corner I think completely. Then I drove the whole race with a completely flat spotted tyre and still managed to keep him behind for most of it.”

“At the end of the day I’ve got no points in the races and I deserved a lot more for the speed I had. You know, that’s racing, I got a penalty that cannot be overturned. No one agrees with it. It is what it is.”

The Feature Race was overshadowed by the horrible crash between ART’s Théo Pourchaire and Enzo Fittipaldi. Daruvala showed empathy to both drivers involved in the clash and aims to stay focused on FIA Formula 2’s final round this season.

“Todays race, I’m just glad that the two drivers are OK, we didn’t really do any laps so now I am just looking forward to the finale in Abu Dhabi.” 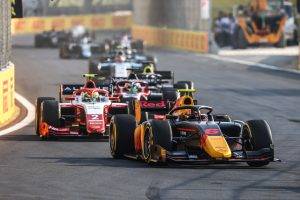