PREMA Racing’s Jehan Daruvala said he was happy to finish second after a challenging Sprint Race at Round 9 of the FIA Formula 2 Championship in France.

Starting from the reverse-grid pole position, the Indian made a good start and kept the lead and, at one point, led by more than two seconds, but Carlin’s Liam Lawson caught and passed him.

“It was difficult; Liam was catching me a lot,” 23-year-old Daruvala explained. “I was pushing a lot, but he had a little more pace than I had today.

“I tried to stay with him in DRS, but it was difficult,” the Red Bull Junior Team driver added.

Daruvala added a fifth second-place finish to his collection of F2 podiums in 2022 but has yet to win.

“I’m sure it’s just a matter of time before we’re on the top step and most importantly, on Sunday. That’s the goal for tomorrow and the coming events,” Daruvala said.

While Daruvala tried to look on the bright side with second, there was much less to celebrate with the second PREMA car of Dennis Hauger.

Hauger, whose car stopped on track twice on Friday, qualified 18th and could only recover to 13th in Saturday’s Sprint Race, describing his race as “a tough one.”

“I had a decent start but lost out in Turn 4,” the Norwegian said before adding: “Throughout the race, I didn’t really have the pace and struggled to get close to the cars in front.”

PREMA’s season has been somewhat underwhelming, considering they won both F2 championships in the previous two seasons. The team are currently fourth in Teams’ Standings, while Daruvala and Hauger are fourth and ninth, respectively. 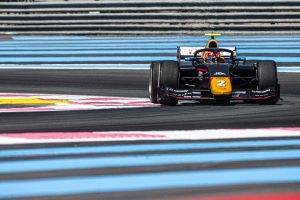