Jehan Daruvala showed pace all weekend to score well in the three FIA Formula 2 races in Baku for Carlin.

After a rough time in Monaco, the Indian driver bounced back to claim a podium in Sprint Race 2.

Daruvala started with a P9 in qualifying, meaning he would line up second in the first Sprint Race. He got off to a good start, fighting Robert Shwartzman for the lead but not making it past.

Guanyu Zhou sped past the Carlin driver on Lap 9 into the first corner before Dan Ticktum also tried his luck into Turn 1 a few laps later.

However, Daruvala didn’t want to give up his position and continued to battle into the next corner, but it didn’t quite work out. Still, the Red Bull Junior Team driver managed to hang on to finish fourth.

Daruvala claimed third place in the second Sprint Race, keeping himself out of the trouble that others around him found to cross the line and claim a podium.

The 22-year-old had an unexciting Feature Race and finished in seventh to round out a weekend of consistent point-scoring results.

Daruvala said: “Definitely a step forward; obviously, after a tough weekend in Monaco, it’s good to be back on the podium and score some points.”

“I’m happy that I scored good points; obviously the pace was not quite how I would like, but we had the pace for top 5 or 6, so I am really looking forward to getting back to places like Silverstone and Monza, tracks which I really like and I am confident that we can fight for wins.

“The Carlin guys did a pretty great job this weekend, we might have been missing a bit in qualifying, but in race trim, we were pretty good.

“Also, I had three very good starts again and good first laps, so those are major positives. I also felt I took a step up in my aggression this weekend as well.

“So even though we didn’t quite have the top pace, we still got a podium, so it shows that even when the speed isn’t everything, we would like we can keep scoring the points.”

Daruvala will now make the most of the break before Round 4 to refocus himself in the hope of getting more podiums and wins when F2 heads to Silverstone in the middle of July. 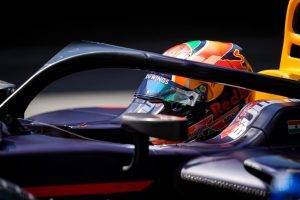