Jehan Daruvala showed his form as he had another strong weekend in Sochi as he claimed third place in the Feature Race as FIA Formula 2 visited Russia.

After qualifying on the front row for the Feature Race, the Indian driver started the first Sprint Race (and ultimately, only Sprint Race) from ninth because of the reverse grid.

However, he couldn’t make up any places in the tricky conditions and fell back to 12th, and out of the points.

The Feature Race was better for Daruvala as he scored another podium to show just how much pace he has.

Daruvala said: “Another good weekend, we were very strong. In qualifying, I was on the front row again after Monza.

“My goal, as I said in the second half of the year, was to improve quali and back-to-back front rows is a good step.

“With the reverse grid Sprint Race format, I started 9th yesterday. I worked my way up to 5th.

“I had a really good pace, and then, unfortunately, pushing for the podium, I spun, and I lost the points placing there.

“So that was disappointing, and I was pretty pi##ed off last night, but today was good again.

“Unfortunately, the inside of the grid was not the place to be, and everyone on the inside row had a difficult start, and I dropped down to 4th.

“After that, the pit stop went to plan, but I lost, I think 3 ½ seconds fighting with Deledda; he was on the alternate strategy, so he was blocking me for a lap or so.

“All in all, not a bad weekend, and I think we have a lot of positives to take into the break.”

Daruvala sits seventh in the drivers’ championship with 96 points and two rounds left of the season.

The Red Bull Junior Team driver will want his pace to continue when Formula 2 heads to Jeddah at the beginning of December. 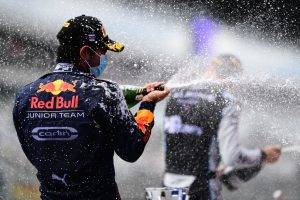