After an eight-week break for the FIA Formula 2 Championship, Jehan Daruvala returned to racing this weekend with some good pace, winning in a dominant display in the second Sprint Race and taking his first win of the year.

The Indian driver also took ninth in Sprint Race 1 and was fifth in the Feature Race to see off a good round for him.

Daruvala started the weekend well in the only practice session. It gave him confidence in qualifying where he showed an impressive performance to finish the session second quickest.

The qualifying result put the Carlin driver starting the first race of the weekend in ninth because of the reverse grid format, which he eventually finished.

Sprint Race 2 saw Daruvala start second and climb into first at Turn 1. He didn’t make any mistakes and led the field for the rest of the race to take his first victory of the year.

The final action of the weekend was the Feature Race, where the major points were offered.

The driver started the race from second and would have had his sights set on another podium. However, it wasn’t to be for him as he fell down the order and had to settle for fifth.

Daruvala said: “My goal before the weekend was to make a good step forward; I knew that had to start with Qualifying, so to get P2 was quite good, just what we needed.

“Obviously, yesterday we saw that pace again in Race 2. I managed to start at the front and get away and win the race. That was our goal, and we achieved it.

“Today’s race was eventful. I didn’t quite get the launch I wanted off the line, and I lost a couple of positions.

“Then I got stuck behind Lundgaard, he hadn’t done his pitstop, and that helped Pourchaire to get past me.

“Then, at the end of the race, the Safety Car came out; I felt that I could have attacked Pourchaire again because he didn’t have any DRS, but I didn’t get that opportunity. It is what is.

“Still, we did decent points in Race 3, we did make the step forward that we wanted, got the win, and we are fighting at the front. So, it was a good weekend.”

Daruvala wishes to show more of his pace in Russia for Round 6 and add to the first victory. 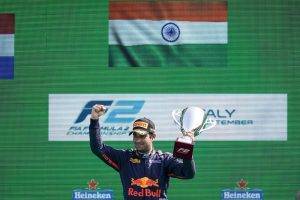