Back to Back Champions PREMA led through large chunks of the sessions in both the morning and afternoon. In the morning Carlin’s Liam Lawson went fastest just ahead of MP Motorsport’s Felipe Drugovich.

Although there is no coverage to view from testing you can keep up-to-date with the action via social media and the FIA Formula 2 official website’s live timing screen.

There are plenty of new faces on the grid this year which is always nice to see with the FIA Formula 3 graduates Iwasa, Doohan, Vesti, Novalak, Williams, Caldwell, Sargeant, Cordeel, and F3 Champion Dennis Hauger all getting a feel out on track.

Many eyes will be on young Turkish driver Cem Bölükbasi this year, following his move in recent times from virtual, car, and now formula racing, seeing him step into the top feeder series.

There were three delays during the session as Hitech’s Jüri Vips twice stopped on track, while Campos Racing’s Olli Caldwell also came to a halt.

A solid Morning session for @CarlinRacing with both of their drivers in the Top 5.

Lawson took the lead for Carlin halfway through the session, with a time of 1:44.522, ahead of Drugovich, Williams Acadamy driver Sargeant, Red Bull junior Daruvala in fourth. Virtuosi’s Jack Doohan completed the top five places.

Drugovich was fronting the timesheets for most of the PM sessions as the F2 teams run various scenarios on their cars.

However, following a couple of red flags, Lawson returned to the top of the order with a 1:43.498 for Carlin.

PREMA had some quick qualifying runs in the second half of the session. This saw Daruvala lap at 1:42.074 with Calan Williams in second and FIA Formula 3 Champion Hauger in third.

A strong first day of #F2Testing for @PREMA_Team and @CarlinRacing with both of their drivers in the Top 5.

?? Back for Day 2 in Bahrain Tomorrow! #F2 #RoadToF1 pic.twitter.com/3vtOPYLjqn

We look forward to seeing day 2 of testing from Bahrain tomorrow morning. 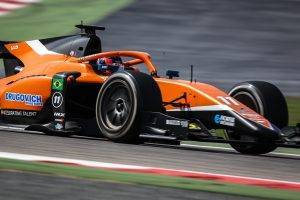