FIA Formula 2 returned to track today for the second set of pre-season tests ahead of the 2022 campaign.

Liam Lawson topped the Day 2 timesheets in Sakhir with a 1:41.623 in his Carlin, ahead of Campos Racing’s Ralph Boschung and ART Grand Prix’s Theo Pourchaire.

Most of the grid sat in the 1:42’s as they all pushed with Qualifying type runs for the second session.

The morning session saw drivers putting in some race simulations and long-runs together.

Jüri Vips overall completed 23 laps and led the session with a 1:46.705 which was 0.526s quicker than second-placed Verschoor of Trident.

A mixed Top 5 with Jüri Vips on top for @HitechGP in the Morning Session on Day 2 in Bahrain ??.#F2Testing #RoadToF1 pic.twitter.com/lVQsjPlWxI

Cem Bölükbasi finished just behind them with a 1:47.688 and just ahead of Enzo Fittipaldi, Jake Hughes, Ralph Boschung, and Calan Williams.

Plenty of drivers put in + 35 laps on the day with Carlin’s Logan Sargeant totaling 45 for the morning. His fastest lap was a 1:49.218 and saw him finish in 8th place.

The session wasn’t without its stoppages though as Van Amersfoort Racing’s Amaury Cordeel twice came to a stop on the track, firstly at Turn 8 and later at Turn 7. While DAMS’ Ayumu Iwasa pulled up at Turn 2. Both drivers posted less than 20 laps overall for the session.

The afternoon session saw everyone go out ready to set some quick times. Unfortunately, this meant pushing hard and the result of this was a stoppage as Marcus Armstrong’s Hitech clipped the barriers at Turn 8. He would only post 2 laps for the day and didn’t get back out on track.

Following this, MP Motorsport’s Felipe Drugovich posted the then quickest time of the day with a 1:42.907.

However, Carlin and Redbull Junior Liam Lawson pushed the hardest to obtain a 1:41.623 and the quickest time of the day. He was followed by Ralph Boschung and Theo Pourchairee.

Here are the Top 5 drivers from the last session ??#F2 #F2Testing #RoadtoF1 pic.twitter.com/Rx4ODjuKZ6

We look forward to seeing the F2 teams and drivers out on track for day 3 tomorrow morning. 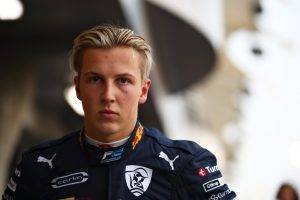