Do Jeddah Safety Changes Make an Impact on F2 Results?

Do Jeddah Safety Changes Make an Impact on F2 Results?

Safety changes to the Jeddah Corniche Circuit will no doubt make a difference to an FIA Formula 2 driver’s welfare, but how much difference do they make to driver’s results?

Pole sitter for Sunday’s Feature Race, Felipe Drugovich, and third on the grid, Jack Doohan, described the contrast from what they experienced in their 2021 campaign.

“For me the changes to the circuit were minimal. Even though there are some changes for the driver it’s quite similar.”

Noting some benefits, the MP Motorsport driver went on to say:

“The biggest differences are the barrier positions in the back straights, between Turn 16 and Turn 22. We can cut the corners a little more, but it doesn’t really make a difference in driving style.”

Virtuosi’s, Jack Doohan, made his Formula 2 debut last season at this circuit, bagging himself a P5 in the second Sprint Race:

“They’ve pushed the barriers back a little bit through the faster flowing sections to give us a little more visibility, but for us it’s quite dirty back there, so we stick to the normal racing line.”

The Australian has already noted the benefits, after today’s Practice and Qualifying sessions:

“The last corner is definitely better. You don’t normally get on power because all of a sudden there’s a wall there, but now it’s a little bit more open.”

The weather is notably making a difference, as it did in Bahrain last weekend.

“The track seems dustier than last year due to the wind, so it’s not clearing as much online, and it’s a lot more hairy as I found out on my push lap [laughs].

“I guess it’s all for improvements in safety, and I think they’ve done a good job.” 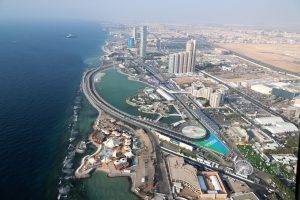