Jack Doohan finished the FIA Formula 2 season sixth in the Drivers’ Championship, and explained exclusively to insideF2 the lost opportunities, where he could have finished Vice Champion.

The Alpine Academy driver’s final weekend of 2022 was about maximising his results and scoring as many points as he could. Qualifying in fifth place for Sunday’s Feature Race would have given him the best chance.

“It wasn’t a great weekend just because of some issues you could say. I think we would have been really good in Qualifying – the first set [of tyres] were quite clear, the second set I just touched the wall a little bit on the exit of the first lap, so I think we ended fifth, which wasn’t bad.”

Finishing P7 in Saturday’s Sprint Race and a DNF in the Feature, due to the left front wheel coming off the car as soon as Doohan exited the pit lane, the Virtuosi team opted for an alternate strategy and a late pit stop, that could have worked out well for both the Norfolk based team, and the Australian’s overall weekend.

“The first race I just survived. Second race I had a little issue with the clutch off the start so I lost a few places, but then we were extremely fast and went a little longer than anyone else. After we pitted we came out 8s behind the lead and I think we would have been in with a shot to win if not an easy podium, but I had an issue with the front left and it came off, which wasn’t ideal.

“So out of the five last Feature Races that’s four not finished that were out of my control – which is obviously plenty of points if I could have finished; I could have been on a minimum of 15 points.”

The Sprint Race on Saturday saw Doohan battling for P6 with Logan Sargeant, who was focused on finishing a clean race because of the valuable Superlicence points he needed to secure a 2023 Formula 1 seat with the Williams F1 team. Both drivers fought hard but fairly on the track, both having their futures in mind.

“In the end I was racing my own race, there was possibilities for me if I finished as high up as I could – I had possibilities too. I wouldn’t say I was being conservative [battling with Sargeant] but because of how my season’s gone I just wanted to finish. Especially in the Sprint Race, I don’t want to take any risks at all because it seems like points are hard to come by for me.

“I’m happy to see him [Sargeant] go to Formula One which is cool. And hopefully we can join him in the near future.” 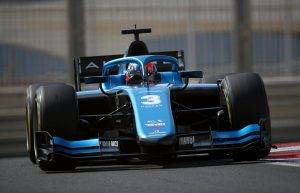