Jack Doohan stormed to pole position in an ultra-competitive FIA Formula 2 qualifying session in Spain ahead of Juri Vips to secure two valuable points for his championship campaign.

Vips will line up second for Sunday’s Feature race in a memorable day for the Estonian after experiencing his first Formula 1 Practice session for Red Bull Racing earlier on.

Frederik Vesti took third position for the Feature Race in a breakthrough session for the Danish driver after an arduous start to the campaign.

A flurry of cars left the pit lane at the green light on the soft compound tyre and built heat into the Pirelli rubber.

However, a quartet of drivers didn’t go out on track straight away, including Alpine junior Doohan and the Practice pace-setter Felipe Drugovich.

Campos’ Ralph Boschung also didn’t run, as he is sitting out this weekend due to a neck injury.

Liam Lawson was the first driver to set a time in Qualifying with a 1:30.753 for Carlin.

The New Zealander ran wide at Campsa but kept the throttle planted on a hugely committed lap in the opening stages of the session.

A number of drivers quickly beat Lawson’s effort, and Jehan Daruvala soon found himself at the top of the timesheets with a 1:29.512.

Drugovich eventually ventured out onto the circuit with 20 minutes to go, electing to run in the gap and make use of a quiet track.

British driver Jake Hughes jumped up to second position with a 1:29.783, two tenths behind Daruvala, in a very impressive lap.

Drugovich took provisional pole with a 1:29.190, which Doohan immediately beat as the sun continued to set at the Circuit de Barcelona-Catalunya.

Daruvala responded halfway through the session and went two tenths quicker than the Australian in a terrific punch and counter punch sequence.

Marino Sato improved to fifth position for Virtuosi Racing but ran marginally wide at Campsa and had his time deleted for track limits violations.

The Japanese driver went for another attempt soon after and improved time-wise but couldn’t better his position.

Doohan snatched provisional pole with four minutes to go after going two tenths quicker than Daruvala who sat watching on the PREMA pit wall and helpless to respond.

After a tough start to the campaign, Vesti also improved to a provisional second place with a storming lap in his ART.

Theo Pourchaire complained of Drugovich impeding his lap on the radio in the dying embers of the session as the MP Motorsport driver blocked him at Turn 1.

The Frenchman qualified in P7 but will start in fourth place for the shorter Sprint Race.

Vips started a last gasp effort for pole position after the chequered flag fell and admirably jumped from P21 to second place in a great lap from the Estonian. 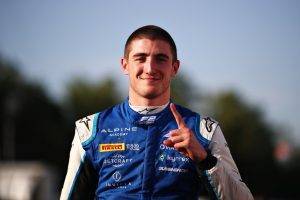