Virtuosi’s Jack Doohan took his third pole of the FIA Formula 2 season in Monza on his final run after the session prematurely ended when DAMS’ Ayumu Iwasa crashed while chasing for pole.

The penultimate qualifying session of the season was also one of the most important two extra points, and a good starting could be crucial in Felipe Drugovich’s quest to wrap up the title here at the Temple of Speed.

Drugovich was aiming for a third consecutive pole position after winning back-to-back poles in Spa and Zandvoort.

With slipstream being the key for qualifying, all 22 cars headed out immediately for the 30-minute session to get vital track position.

Driver jockeyed for track positions in the first runs, with the opening lap used as a feeler lap to get the tyres up to temperature and to get demonstrative laps on the board.

It wasn’t long before the first altercations from the jostling occurred when Jack Doohan and Prema’s Jehan Daruvala had a close shave at the Roggia chicane – both continued with no damage.

Ayumu Iwasa was on the early pace as he had the benefit of a tow to set provisional pole before Drugovich pipped him. Soon after, the MP Motorsport driver, in turn, was outdone by Liam Lawson.

Lawson and Drugovich traded sector times in the second fast runs, but Lawson bettered his time and remained on pole for the time being.

Hitech’s Jüri Vips then went fastest – carrying on from his form in Practice where he was on top – after getting his timing to pick up the slipstream perfectly to be 0.476 fastest than Carlin’s Logan Sargeant, who also had a blinder.

Drugovich was 10th – which would mean pole for the Sprint Race – but needed a faster time to set himself up well for the all-important Feature Race.

The Brazilian got a decent slipstream to get up to 3rd while Doohan, without it, managed to miraculously take provisional pole by 0.053 ahead of Vips with a time of 1:31.965.

At the halfway point of the session, it was Doohan, Vips, Sargeant, Drugovich, Theo Pourchaire, Lawson, Amaury Cordeel, David Beckmann, Daruvala, and Richard Verschoor in the top 10 as the drivers came back into the pits to bolt on fresh softs to go for one final push.

The field streamed onto the track for their final runs as the sun was setting with just about eight and a half minutes to go.

Slipstream tactics became all the more crucial as the tow was worth a lot of time. Everyone was on their warming-up laps for the first run to get temperatures up.

With five minutes to go, the shootout began, with Drugovich improving thanks to gaining a slipstream behind another car.

Further up the road, Iwasa grabbed pole – before Drugovich, Armstrong, Lawson and Doohan in succession bettered their times as improvements were plentiful coming into the final minute.

But then qualifying took a dramatic turn as Iwasa spectacularly crashed at the Alboreto Parabolica while was chasing hard for pole and was on course for the front row of the grid.

The yellow flags came out, which brought qualifying to a premature end. Iwasa had replicated Isack Hadjar’s crash earlier in F3 with a Red Bull-backed car in the barriers at the same corner.

After the dust settled, it was Doohan with his third pole of the season, with Lawson and Armstrong rounding out the top three, while championship leader Drugovich finished the session in a comfortable P4.

Drugovich’s main rival Théo Pourchaire starts 14th after Iwasa’s accident prevented him from getting a better starting position, leaving him on the back foot for both races.

Potential penalties, however, are pending as a few drivers improved their times when Iwasa crashed, including Drugovich, which might impact his starting position. 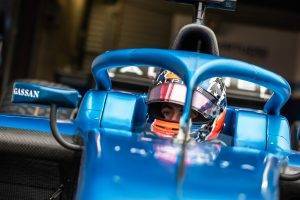