Crossing the line over 5s ahead of the rest of the field, on a track that’s ‘crucial on tyre deg’, Jack Doohan took his second FIA Formula 2 Sprint Race win in Budapest today.

Talking after the race to insideF2 and selected media, the Virtuosi driver explained the package the Norfolk based team put together for him today:

“Four wheels, steering wheel, good engine, medium compound on those four wheels are… [Laughing.] No… On my side, hard work to try to really get on top of the management side of things and really finding what works for me and we’ve been really exploring that quite a lot.

“This is a track that’s historically very crucial on deg and if you look back at 2020 in the Sprint Race, everybody except Luca Ghiotto made a pit stop which is not a mandatory pit stop race so it explains itself. Today we did a good job, so I’m happy with that and happy with my progress.”

Doohan was pleased with his win, despite it being less points than a Feature Race, because of his general tyre management in the 2021 Formula 3 event when driving for Trident; Who went onto win last season’s F3 Teams’ Championship:

“I’m happy with the win. Obviously it’s only a Sprint Race but we managed it very well. I feel a little bit more deserving of it due to that. I think last year in F3, I absolutely cooked the rear tyres and went backwards quite a lot, so it’s good to know I’ve made progress in my development and management, and coming more at one with the Virtuosi car, knowing that we have a strong race package as well.”

Doohan had a strong start in the Le Castellet Feature Race, moving from P4 to first straight off the line. Today’s start wasn’t quite as perfect:

“I had a start mapping for the Formation Lap and I did that and went straight into wheel-spin. Obviously the clutch then heats up, everything heats up a little bit more, so naturally it will not be as aggressive. So I went minus-1. Hopefully with the hotter rear tyres it was going to be ok, but it still wasn’t enough, and as soon as I dropped the right paddle it just went straight into wheel-spin. It wasn’t ideal at all and I had a frantic look in the mirrors and luckily the second row had the same, but Enzo [Fittipaldi] obviously did it quite well.

“It was not ideal getting passed by Enzo off the line, just going straight into wheel-spin, but luckily I was able to get him back with a slight mistake from his side, and then it was quite close for the next 15 laps. And then the last eight laps when Jüri [Vips] started to come down to 1.1s I thought I’d see how much we had left. I managed it quite well, and I jumped back into the 34s and stayed there until the end.” 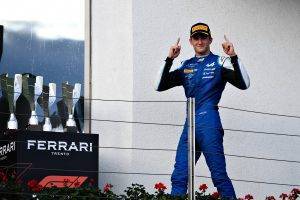