As the sun started to set on the Autodromo Nazionale di Monza, UNI Virtuosi’s Jack Doohan secured pole position for Sunday’s race with a time of 1:31.641. Fending off Marcus Armstong and Liam Lawson, the F2 rookie took his third pole of the season. Bouncing back from the terrible results at Zandvoort, the Australian has his work cut out for Sunday.

While usually, we get a driver’s view on the qualifying; we interviewed Jack’s Race Engineer, Pau Rivera, and his thoughts about the session. Pau began by saying, “Yeah it worked obviously very well being in P1. We looked strong, I think we’re quite happy the way it went.

“I think we planned it well, we managed well throughout the session. So [yeah] very pleased with how quali went and getting the end result.”

Qualifying in Monza is always a tricky task as drivers try to either put in a lap in clean air or take advantage of a slipstream from the driver ahead. Commenting on the difficulty and the instructions that engineers give to drivers, Rivera said, “In a way we saw from F3 that qualifying was a bit messy. So it was just staying calm and chilled.

“We knew we had the speed, with already in FP we were looking quite good. So we just got to stay chilled and do our best, it should have been alright; which eventually it was okay.

“Getting a good track position is very important here in Monza and we managed to do so,” the Spanish engineer stressed.

While Pau has to manage a new driver every now and then in F2, he praised Jack for his performance. Rivera said, “He has shown a bit more consistency now which is what we were lacking in the beginning. We were fast but then always something was happening in the races and we’ve managed to put in everything more consistency.

“It’s a pity what happened in Zandvoort was a bit out of our control. That would have been nice to put the points there but racing works like that,” Pau recalls the weekend in the Netherlands.

The engineer also highlighted that the team morale has remained the same throughout the season, but when the driver is in a position for the podium, the right amount of effort goes in to make it happen.

Asked when compared to the drivers Pau has worked with before, the Spaniard revealed Jack’s strength. He began saying, “Jack is definitely a lot more aggressive. I always claim that if there was one set of tyres, one lap for everyone, then we would be on pole most of the time.

“He [Jack Doohan] has a very good feel for the grip available there and he is very fast; he can just do it straight away,” Pau concluded. 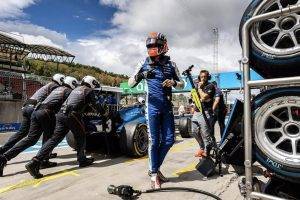