Double Podium for PREMA at Baku

Double Podium for PREMA at Baku

PREMA Racing wrapped up an extremely positive weekend with a double podium in the FIA Formula 2 Feature Race at Baku.

Starting from P3, Oscar Piastri claimed a brilliant second place. The Australian made some razor-sharp moves in the early stages of the race. The driver kept himself out of the incidents and mishaps that happened out front.

Despite a five second time penalty for an unsafe release after his pit stop, Piastri had enough pace to keep himself right behind eventual race winner Jüri Vips.

Piastri said: “P2 in the Feature Race, I’m happy with that. I think we didn’t quite have the pace to match Jüri today, but we got good points, another trophy.

“We have been a bit lucky with the five second penalty, not doing anything in the end. I think the pace was strong, another solid weekend in terms of what we could control.

“I’m happy with how it went, and now we will enjoy the break before Silverstone.”

Robert Shwartzman put in a great recovery drive from 10th on the grid to finish just behind his PREMA team mate. As a result, the driver completed a double podium for the team.

The Russian had a strong pace that gave him his second podium of the weekend after winning the Sprint Race 1.

Shwartzman said: “Quite a decent start, but I wasn’t going to risk much, so I lost one place to Drugovich, but I got it back after the safety-car restart. I had a pretty good pace but several cars in front.

“We went to the pit lane one lap after the drivers in front. It wasn’t ideal because my rears were already gone, but the pit-stop itself was good, and I was P4 out of the pit lane. I tried to overtake Boschung as quick as possible, and after I got him, I was P3.

“I kept my pace, I went easy with the tyres in the case of the safety car because the gap was pretty big. It was going to be very challenging to catch the guys in front.

“The safety car didn’t come, and the final stages were pretty normal. We ended up P3, which is very solid points finally after two unfortunate weekends. Now we are back really competitive, and we want to fully prepare for Silverstone.”

Shwartzman is now back in full contention for the drivers’ championship, sitting in third behind Piastri.

Due to the double podium, PREMA reclaimed the lead of the teams’ championship.

The series will take another break before the team return to Silverstone in the middle of July for Round 4. 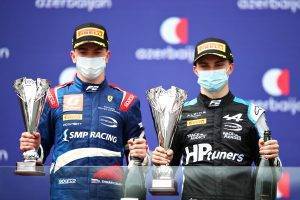