Felipe Drugovich “didn’t imagine” he could win in Barcelona after starting the race from P10. He had a difficult Qualifying session on Friday, but came through the field to take victory in the Feature Race and regain the lead of the FIA Formula 2 Championship.

Speaking in the post-Feature Race press conference, the Brazilian reflected on an unexpected win:

“[The win] means a lot. It’s something I didn’t imagine before the weekend, especially starting from P10. It gives me a lot of confidence going forward in the Championship.”

The Circuit de Barcelona-Catalunya is known for being a difficult place to overtake, where a high grid position is key. However, with rising track temperatures expected to create high tyre degradation, moving up the order was a possibility.

The MP Motorsport driver extended his opening stint on the soft tyres, and was able to make ground on the leaders. After the pit stop, he used his fresher medium tyres to catch and overtake Frederik Vesti and Jack Doohan, eventually winning by over five seconds.

The new Championship leader was told to push on, and pit when he felt the grip fading:

“We didn’t expect to go that long. My engineer just told me to keep going… that was a pretty good call from them.

“I’m really happy with the relationship with the team. They completely trusted in me. I’m extremely happy for the whole team.”

The Dutch team’s day was made even better by Clément Novalak’s performance, as he made his way through the field after pitting for soft tyres late on, and eventually finished fifth to keep MP Motorsport at the top of the Teams’ Championship.

After the race, Drugovich reflected on how he has made such an improvement this year:

“My experience is what is counting the most and helping me out. I missed out on a lot of opportunities last year, and I’ve tried to focus on the mental side to be really consistent.”

Felipe has certainly found that all-important consistency, winning both the Sprint Race and Feature Race this weekend, and winning two out of the first four Feature Races this season to give him 26-point lead in the Championship.

The title hopeful will hope to repeat his performance when Formula 2 travels to Monaco next week, while the rest of the field will be looking for ways to knock Drugovich off his perch. 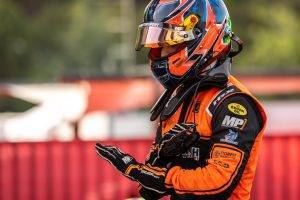