Round 6 of the FIA Formula 2 season rolls into Spain at the Circuit de Barcelona-Catalunya bringing to an end the second of our triple-headers.

We have had ten race’s thus far in the 2020 season and Brazilian Felipe Drugovich sit’s a pleasing tenth in the standings. The MP Motorsport rookie has had a solid start to his Formula 2 season and is looking forward to the challenges at a hot Circuit de Barcelona-Catalunya.

“I really like the flowing first sector at Barcelona, and the very slow last sector which is really technical. A driver can really make a difference there. It’s important to be focused and nail the last sector to get the maximum out of the lap time. I also really like the city. I’ve been many times to Barcelona, and I love the place. It’s a shame that we cannot move around this year.”

Tyre degradation has been a key factor in this season’s racing and Barcelona will be no different.

The Circuit in Catalunya is a demanding circuit on tyres, add into the mix a peak summer race in Barcelona and we look set for another frantic race for both drivers and strategists.

“Tyre management is really important, especially with the long right-hand corners. Those corners are a pain in the bum when it comes to the tyres. They’re really made to suffer, and you must be careful – knowing the right way to push while not using them up. You can lose a lot of time trying to save them, so it’s complicated to get right, but it’s so important if you’re going to keep your tyres alive, especially the left ones.”

Drugovich has secured pole in prior rounds and see’s this as key to success at Circuit de Barcelona-Catalunya which is a challenging track for overtaking.

“It’s a good track for overtaking, but you only really have one proper point which is Turn 1. The rest is quite difficult. You have long, fast corners with a lot of turbulence from the car in front, so you lose grip and downforce on the front. It’s difficult to follow closely. However, if you start in front there’s a big run down to Turn 1, so it’s quite easy to be overtaken because of the slipstream. Hopefully, I’ll be starting from the front and I’ll have to deal with that!”

Can the Brazilian build on his points and head towards the front of the championship standings? It looks like Qualifying is key and he certainly has had good form with that this season.

Give us your predictions for this race weekend @F2inside on Twitter and join our ever growing community of Formula 2 fans! 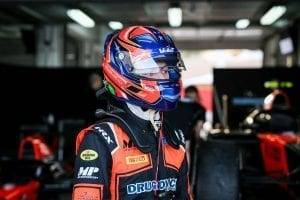