UNI-Virtuosi’s Felipe Drugovich topped the final day of FIA Formula 2 testing at The Circuit de Barcelona-Catalunya, setting the fastest time with a 1:27.945.

Drugovich secured his best position from the in-season testing compared to his previous results, where he only finished fifth fastest.

The reigning champion of FIA Formula 3, Oscar Piastri, was second fastest in the morning session for Prema Racing with a +0.160 gap to the leader ahead of ART‘s Christian Lundgaard in third.

So far from the testing, Christian Lundgaard has not failed to get inside the top 10.

Both Hitech drivers, Liam Lawson, and Juri Vips, finished the session in fourth and fifth, respectively, almost matching their results from the first-morning session on day one.

The second ART driver from the session, Théo Pourchaire, completed the session in sixth, closely followed by Robert Shwartzman in seventh for Prema Racing.

Trident’s rookie Bent Viscaal finished the session in eighth, ahead of the German driver, Lirim Zendeli in ninth for MP Motorsport.

Current championship leader Guanyu Zhou finished in tenth fastest for UNI-Virtuosi with a 1:28.755.

The session ended with a red flag with no time left for the testing as Carlin’s Jehan Daaruvala stopped on track whilst being in the 16th position.

Just 30 minutes after the afternoon session started, the first red flag appeared from the testing for around 20 minutes, with only 11 drivers on the track prompted by Hitech’s Liam Lawson.

Another red flag emerged from the session involving Richard Verschoor before Liam Lawson brought the third red flag just 12 minutes before the end.

HWA Racelab was the first team to lead the final session from the three-day testing in Barcelona, with Matteo Nannini and teammate Alessio Deledda second fastest.

With two hours remaining, Nannini continued to lead the session with three purple sectors setting the fastest time possible before the dramatic switch happened between the Italian driver and Bent Viscaal.

Trident’s Marino Sato, closed the session in third only +0.663 behind his teammate.

Alessio Deledda was fourth fastest for HWA, showing his progress through the weekend, after a challenging in-season testing for him, ahead of Marcus Armstrong in fifth for DAMS.

The FIA Formula 2 will be back on the 24th of May supporting the Formula One Grand Prix in Monaco. 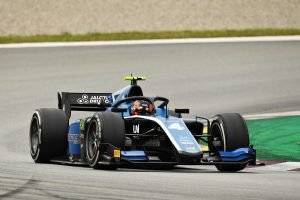