Drugovich on his Formula 2 title: “It’s such an unreal feeling!”

Drugovich on his Formula 2 title: “It’s such an unreal feeling!”

Felipe Drugovich, Formula 2 champion – in his own words, “It sounds amazing!”

It’s an accolade which will now follow the Brazilian for his whole career, 2022 Formula 2 champion, after securing the title over the weekend at Monza. And speaking about the achievement, he said that “it’s such an unreal feeling” – adding that “it takes a bit of time to sink in, then you actually realise you’re the champion.”

Drugovich did not become champion in conventional style, however. His Sprint Race ended on Lap 1 after contact with Amaury Cordeel, and he claimed the championship from the pit lane after Théo Pourchaire failed to score enough points. Reflecting on the circumstances of his championship win, Drugovich had the following thoughts:

“It was for sure not how I expected it. At the beginning I was a little bit nervous because The?o was making up some positions. In the end, we figured out it was quite difficult for him to go up the order and the feeling was the same as if I’d been in the car. It’s just something unreal and I think I’m going to really enjoy this for a long time.”

Drugovich’s 2022 season has a lot of high points, with nearly every race baring points. But if he had to pick his favourite memory, Drugovich claims that “Monaco will be one, probably the most special one” – after taking the Feature Race victory in the principality. He also added that “Zandvoort was really special for the team, to win their home race for them” – a victory which also allowed him to come to Monza with a chance to seal the title.

But when asked about the double victory at Barcelona, Drugovich proclaimed “I actually forgot about it!” – excusing himself by adding that “it was five wins [in 2022] and all of them were very special”.

Despite the high points, Drugovich maintained that he still had periods where he struggled in the year, especially with doubts over the championship. He added the following about these doubts:

“I think throughout the month of July when we had four race weekends in a month, we felt we lost a bit of performance, and we were losing that lead in the Championship. Obviously, it wasn’t the end of the world because we were still up there with some points gap, but it’s never nice to see the others improving and you staying there. At the same time, I think that was something that needed to happen so we could work in the summer break and come back stronger.”

Now he’s Formula 2 champion, the sky’s the limit for Drugovich, and he’s already made his intentions clear:

“For sure, this title will open up a lot of opportunities for me and hopefully one day I can be in F1 as well. That’s the main target and I will fight for it.”

Adding on some comments about his future, Drugovich stated that for 2023, he’s “trying to be around in the paddock”, but that the main aim was a Formula 1 seat – adding on that if this was not possible, he’d “try to get a reserve seat”. But with multiple teams yet to confirm their lineups, there is still a chance for Drugovich to break through, and secure himself a place on the F1 grid for 2023.

On a closing note, Drugovich stated that “it’s nice to have a good celebration before this break” – having to wait two more months before competition returns. But when it returns, he will return as a champion, an accolade he says he’s dreamt of since childhood. 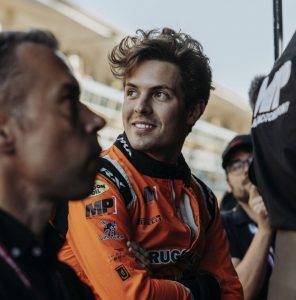