A rolling start, is how the Sprint began. Because there isn’t a compulsory stop during the shorter of the two races, the drivers didn’t pit and stayed out; perhaps in the hope there may be a Safety Car at some point during the race. The tyres were overheating on a drying track, some struggling more than others.

“I think you have to keep adapting, as the water on the track changes, as it keeps drying up. You need to compensate for everything.

“You have to keep adapting. Keep seeing where there’s more grip.”

Normally on wet tyres, the damper the track, the better. Starting in eighth place because of the reverse-grid, it wasn’t until the last four laps that the MP Motorsport driver began making an impression. Within two laps he was clearly finding more grip than those around him, as he overtook ART driver, Frederik Vesti, for P6, and in turn, PREMA’s Jehan Daruvala, to finish in fifth:

“That race for me was kinda the opposite, I was quite bad compared to the others at the beginning. I think because of the set up that we managed to be quite quick at the end.

“So it also depends on the set up on the car, but I had to take care of the tyres and keep them cool every lap.“

Expanding on the MP car’s set up and if it suits certain circuits more than others, the Brazilian driver considered:

“It depends a lot on the day if a track suits our car. I’d say Barcelona suits us very much, so if I can point out any circuit it has to be Barcelona.”

Drugovich seems to be in harmony with his MP car, and is managing his tyres better than others this season. His wealth of experience is undoubtably steering him towards the Formula 2 Drivers’ title. 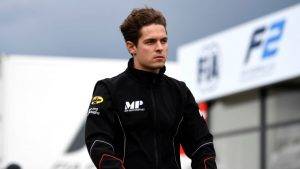