The Brazilian driver achieved his third win of the season and is now tied for the most wins in the season alongside Ilott and Robert Shwartzman, after success in first Sprint Race in Austria and in Barcelona.

Speaking about the race, Drugovich said: “An amazing race. That is my first Feature Race win and it feels unbelievable [..] We were really fast, so a big thanks to the team.”

The rookie driver started the race second on the grid and got a flying start off the line to dive down the left of Ilott into the first corner. However, he braked earlier and the UNI-Virtuosi was able to hold on.

Heading into Turn 2, the MP Motorsport driver was able to outpace the Brit and pass him before the corner.

Whilst battles were ongoing behind him, Drugovich focused on setting the pace and managing his medium tyres. Extending their life by three laps more to Lap 18 allowed him to come out ahead of Ilott in 12th.

As he was on cold new tyres, he locked up and Ilott, who’s tyres were already up to temperature, was able to take advantage of it and assume the lead of the race.

Four laps later, he was able to return the favour and take the lead from Ilott. From there on he worked on gaining a gap to his nearest rivals, opening up an eight second gap within a couple of laps.

As Ilott’s tyres waned, Drugovich was able to cruise to a comfortable victory and add another victory to a standout rookie season.

Drugovich said: “We got a good start and I got by Callum (Ilott) at Turn 1. The job was a bit easier after that because I got clean air out in front. The pit stop went well and from there it was about keeping the pace.”

Drugovich will be starting eighth on the reverse grid for tomorrow’s Sprint Race with the PREMA of Robert Shwartzman on starting on pole. 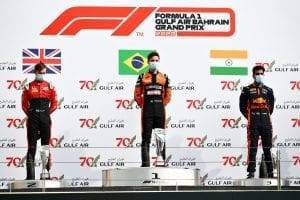