With air temperatures reaching 30 degrees and climbing, and track temperature reaching 40, the 22 drivers had their work cut out with the searing heat – looking after tyres became a priority on Britain’s hottest day of the year so far.

All 22 drivers went out early. Yuki Tsunoda continued his relentless pace from this morning’s Free Practice session, with a time of 1:40.216 to top the timesheets ahead of Nikita Mazepin.

Jack Aitken knocked the Honda junior off provisional pole position with a time of 1:40.211 to snatch pole by +0.005 seconds.

Aitken was quickly beaten by Christian Lundgaard who snatched provisional pole by +0.015 before Jehan Daruvala snatched the lead by 0.056 seconds.

The first lap times deleted by race control were both the MP Motorsport drivers, Nobuharu Matsushita Drugovich and Ilott who faced the scorn of the stewards.

Robert Shwartzman’s testing weekend got worse as he aborted his flying lap by putting a wheel on the grass on the entry into Abbey.

Shwartzman having a near-miss with Sean Gelael down the hanger straight put the Russian under investigation.

Schumacher had his lap ruined not once but twice by Roy Nissany. The Israeli driver gave the German a love tap into the final corner.

Nissany continued his wild qualifying by holding up Giuliano Alesi that ruined the Frenchman’s lap, before having a spin into Copse as the Israeli was put under investigation for his incident with Schumacher.

With 10 minutes to go the pits were full of activity as the drivers put on a fresh set of tyres to go out for their final qualifying runs.

First to show their hand was Tsunoda whose poor middle sector ruined a potential pole position lap after going wide into Copse sticking him down in fourth.

Surprisingly Drugovich pinged a lap to put himself top of the timesheets with a time of 1:39.527 just over a 10th ahead over Ilott who moved himself up to second ahead of Mazepin.

Schumacher moved himself up to third with a time of 1:39.761 to split Ilott and Mazepin whilst teammate Shwartzman misfortunes continued with the championship leader struggling down in 18th.

Next to improve was Lundgaard and Aitken who moved themselves up to fourth and sixth place whilst Guanyu Zhou was only eighth.

But nobody was catching Drugovich who took pole for tomorrow’s Formula 2 Feature Race, ahead of Ilott and Schumacher with Lundgaard, Mazepin and Aitken rounding off the top six.

Carlin was unable to replicate their practice pace with Daruvala seventh and Tsunoda ninth with the pair split by Zhou.

Championship leader Shwartzman will start 18th pending a stewards decision on the incident with Gelael.

Hungarian race winner Luca Ghiotto could only manage a dismal 13th ahead of Pedro Piquet.

Nissany’s wild day ended with him in 19th – pending an almost certain grid penalty alongside Alesi.

Artem Markelov and Guilherme Samaia rounded off the 11th row with the Brazilian over 2.5 Seconds slower than his fellow countryman Drugovich. 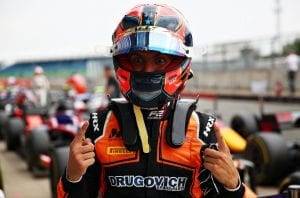