In a peerless drive, Felipe Drugovich took a commanding FIA Formula 2 Sprint Race victory in Spain for MP Motorsport to snatch the championship lead away from Theo Pourchaire.

Ayumu Iwasa drove to P2, securing his first podium of the season in Spain after a solid effort, with Logan Sargeant also taking his F2 silverware after a quick getaway earnt him third place.

The pole-sitter Calan Williams will be wondering what could’ve been after agonisingly stalling on the formation lap, forcing him to start from the pit lane.

It was a cruel blow for the Australian, who had a huge opportunity to deliver a good result in the Sprint Race.

Jake Hughes got a great initial getaway, but it was Drugovich who led into Turn 1 from third on the grid after a superb start for the MP Motorsport driver.

Pourchaire struggled on the opening lap suffering a poor start, and fell back to P7 after being swarmed by the chasing pack.

Drugovich continued to lead in the opening stages ahead of Red Bull Junior Iwasa with Logan Sergeant in third place, who mounted a challenge on the Japanese driver with a late lunge into Turn 1 but couldn’t make it stick and maintained P3.

Juri Vips, who was running in P6 on Lap 6, spun at Repsol to end his Sprint Race after a hugely impressive Qualifying session to make it two unforced retirements in two races.

The Hitech driver beat his steering wheel in frustration as yet another promising result slipped out of his grasp.

The race director subsequently deployed the Safety Car to clear the stricken Hitech machine, which bunched up the field, crucially allowing Iwasa to close up to Drugovich up front.

Undeterred, the race leader got a great restart, and the Brazilian held the lead into Turn 1 and quickly built a sizeable advantage over his nearest rivals.

The race for the lead soon stagnated as the drivers continued to babysit their hard compound Pirelli tyres on a baking hot Circuit De Barcelona-Catalunya track surface.

Critically for the leader, his title rival Pourchaire sat in sixth position, behind PREMA driver Jehan Daruvala and unable to line the Indian up for a pass as the PREMA harried a Jake Hughes with quickly fading rear tyres.

Daruvala driver finally passed Hughes for P4 on Lap 20 before Pourchaire completed a carbon copy move on the Briton a lap later.

Jack Doohan heaped more misery on the Van Amersfoort driver and took P6 as Hughes’ tyres completely fell off the cliff with four laps to go.

The day belonged to Drugovich, who also set the fastest lap of the race to gain a valuable extra point for his efforts and make the victory even sweeter for the 21-year-old. 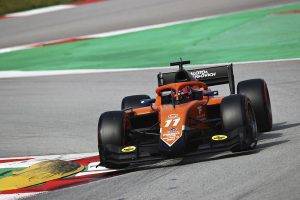