MP Motorsport’s Felipe Drugovich topped Qualifying for Round 11 of the 2022 FIA Formula 2 Championship with a lap of the Circuit de Spa-Francorchamps that was 0.383 seconds faster than that of Enzo Fittipaldi in second.

The session started in wet conditions, but water evaporated throughout the session until the circuit was fully dry by the end. Drugovich’s 1:58.232 was just one-thousandth quicker than the pole time set by Robert Shwartzman on F2’s last visit to the circuit in 2020.

While drivers set fairly similar times in the first and third sectors, which include long stretches at full throttle, Drugovich made the biggest difference in the tight and twisty second sector on this occasion, setting a 51.677 – four-tenths better than what anyone else was able to do.

Sector 2 includes 10 of the 19 official turns on the Belgian circuit, including a heavy braking zone at Les Combes after the Kemmel Straight, the downhill Rivage hairpin, the double left-hander at Pouhon, and the right-left-right sequence that brings the drivers to Sector 3.

When asked by InsideF2 after the Qualifying session about how he made the difference in that sector, championship leader Drugovich said he felt comfortable behind the wheel.

“To be fair, I don’t know what the others were doing [or] how I gained all that lap time, but all I can say is the car was good. I felt good. My lap was very good – I think very well driven through the second sector.

“Maybe through the first and last sector, obviously we can always improve a little bit, but in the second sector, I felt it was a really good lap, so not much more I can really say about that.”

Fittipaldi was the closest to Drugovich in that sector, but Charouz Racing System driver attributed the disparity to a difference in confidence levels.

“Sector 2 was very tricky. I think Felipe just had that little bit more confidence to push in the high-speed corners,” Fittipaldi told InsideF2.

“My Sector 2, I could have been better for sure. If I look back to it, there was some small little mistakes, but I feel like I did nail it quite well.

“There were some things that I think could have been a little bit better from my side and the car as well in the high-speed corners – just [having] a bit more confidence – but it’s difficult in these conditions. The car was there today, and we made a really good qualifying today, so I’m just happy about it.”

Carlin’s Logan Sargeant, who edged Jack Doohan for third overall by two-thousandths, said that poor track position might have hindered his ability to set a better time in Sector 2.

“I’m happy with the lap that I got out of the car. Maybe I was a bit too close to the car in front, which could have compromised me a little bit in the second sector, but I think I’m happy with the way I drove it.”

Drugovich, Fittipaldi and Sargeant will start from the first three positions on the grid in Sunday’s Feature Race, due to start at 10:20 local time. 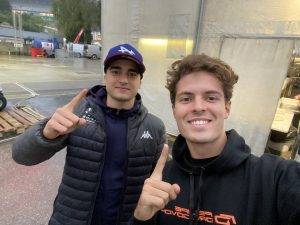