Drugovich sets pace in opening Practice session of the season

Drugovich sets pace in opening Practice session of the season

Felipe Drugovich gave his MP Motorsport team plenty to smile about as he set the fastest time of the opening Practice session of the season.

Drugovich, who rekindled his relationship with the Dutch outfit after a year at UNI-Virtuosi, showed that he had lost none of his speed over the winter, with his time of 1:44.484 over a tenth faster than Red Bull junior Ayumu Iwasa, who jumped up to second on his final run.

After three months of furious preparations and pre-season testing, the talking finally stopped, and the action finally got underway in sunny albeit windy and chilly conditions.

At the green light, all twenty-two cars left the pits to begin their installation laps and to check that all systems were working before coming back into the pits to change tyres.

The first three drivers to set a lap were the MP Motorsport pair of Clement Novalak and Drugovich, with Amaury Cordeel also registering a time.

Novalak’s laid down a benchmark time of 1:47.206, which was quickly bettered by Jake Hughes and Cordeel, who broke into the 1:46s with Hughes over two tenths quicker than his Belgium teammate on his first push run.

Hughes then found plenty of his time on his next push lap, setting the fastest time in all three sectors on his way to setting a 1:45.294.

Enzo Fittipaldi had a hair-raising moment on his first push lap, as the Brazilian narrowly avoided a collision with Marino Sato, forcing the Charouz driver to back out of his lap, much to his disgust.

On his first fast lap, Richard Verschoor also made a mistake as the Dutchman went too hot into Turn 11, forcing him off onto the run-off area.

With just under 20 minutes left in the session, Hughes still topped the timesheets from Liam Lawson and Verschoor, with Olli Caldwell going well for Campos with the fourth-fastest time.

But shortly afterwards, Lawson finally knocked the Brit off the top of the timesheets, with a 1:45.215, +0.029 quicker than Hughes’s time.

Lawson’s countryman Marcus Armstrong moved to the front with over 15 minutes to run in the session. The former Ferrari Academy driver managed to break into the 1:44s with a 1:44.901 that was quickly beaten by Prema’s Jehan Daruvala, who managed a 1:44.838 that was good enough to go to the front of the timesheets.

Next to move to the front of the times was Drugovich, who managed a 1:44.484 on his next push lap, over two tenths quicker than his teammate Novalak who jumped up to second with his time of 1:44.769.

Despite the DAMS’ pair of Iwasa and Roy Nissany improving to second and third with their final runs, no one could dethrone Drugovich, who finished the session fastest ahead of Iwasa and Nissany with Novalak fourth ahead of Armstrong, Daruvala, and Lawson.

Sargeant finished the session eighth fastest ahead of Caldwell and Hughes, who rounded off the top 10. 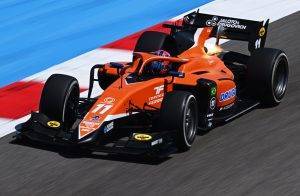